In a tweet Wednesday, Cardinal Wilfrid Fox Napier responded to a Nigerian pro-life activist who said that with its caption, “Make Abortion Great Again,” the Guardian had adopted the spirit of genocidal movements.

“How the spirit of the likes of Hitler, Stalin must be rejoicing at this total abandoning of traditional, human ethical standards & Christian morality!” Cardinal Napier said in reply.

I wonder how @guardian editors decided to use this picture for their pro-abortion piece.

An abortion entails poisoning unborn babies,decapitating ,dismembering & suctioning them out of the womb.

You want to make this genocidal act great again?😳 pic.twitter.com/R0wEc7MuRe 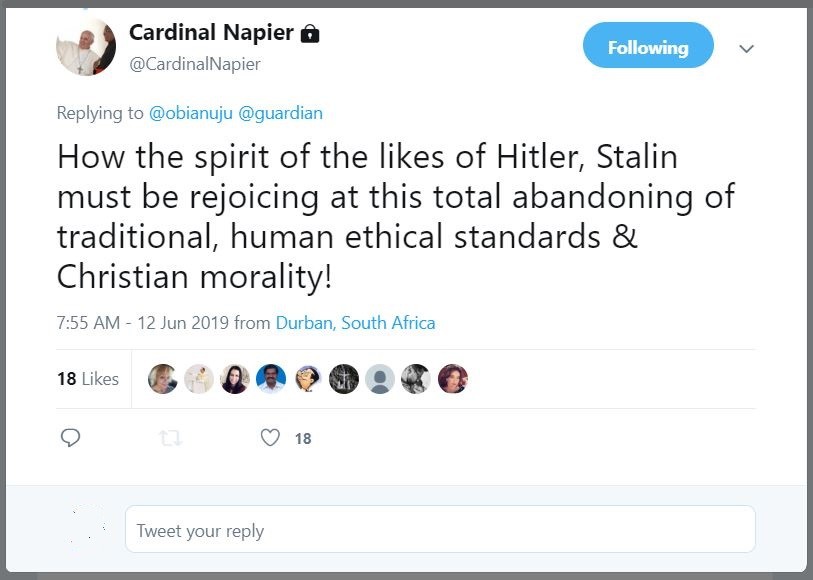 This is not the first time Cardinal Napier has weighed in forcefully on the matter of abortion. Earlier this year he defined it as “the hate crime of our era,” which is not recognized as such only because of political correctness.

“Is there any good reason, other than political correctness, why abortion is not defined as & declared immoral & illegal, as THE hate crime of our era?” the cardinal tweeted in early February.

At that time Napier was responding to Live Action, a pro-life group, which was tweeting about abortion and racism, underscoring how abortion disproportionately targets the black community.

“There is no group that kills more black Americans than Planned Parenthood,” Live Action noted. “Abortion is the most lethal form of racism.”

Abortion accounts for a startling 61 percent of deaths of African Americans, according to researchers from the University of North Carolina at Charlotte.

A 2018 report found that induced abortion was responsible for 1.152 million deaths, making it the number one cause of death in the United States, accounting for nearly twice the number of deaths from heart disease (599,413) and cancer (567,628).

While abortion accounts for nearly a third of all U.S. deaths, it makes up over 60 percent of African American deaths, according to the study published in the Open Journal of Preventive Medicine.

According to the Centers for Disease Control (CDC), between 2007 and 2010, more than 35 percent of the deaths by abortion in the United States happened to black babies, despite the fact that blacks represent only 12.8 percent of the population.

By functional standards, abortion is a racist institution in the United States, with black children aborted at nearly four times the rate of white children.