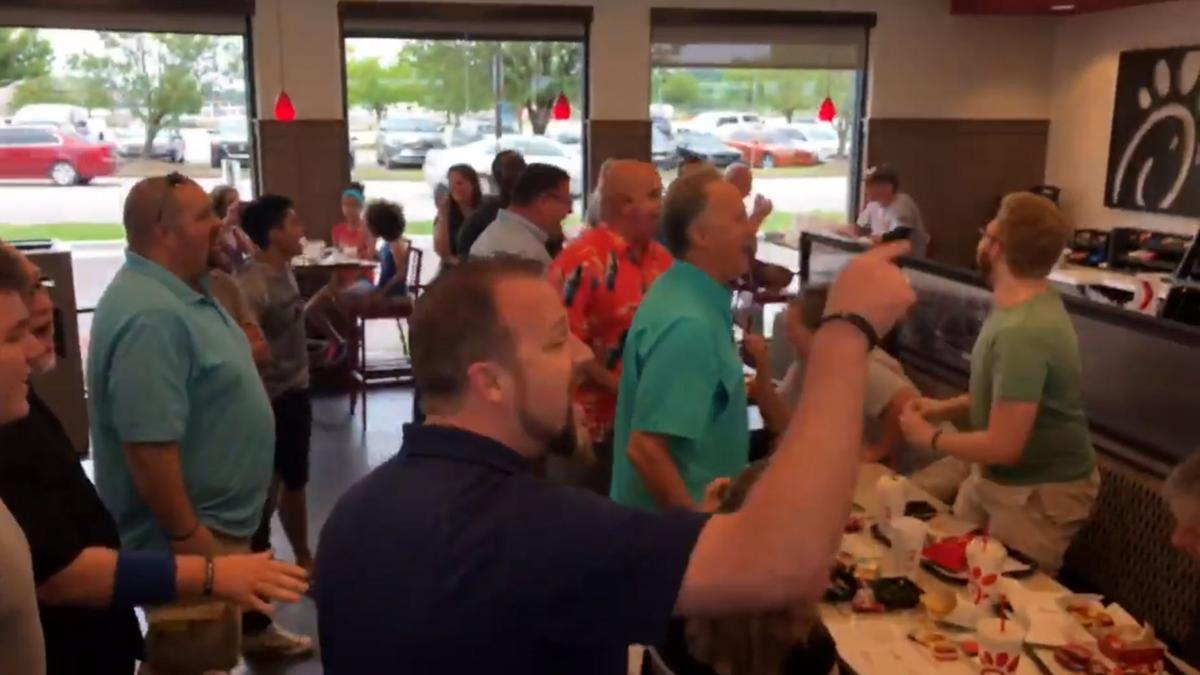 (FOX NEWS) — The sounds of smacking lips and sizzling chicken were briefly interrupted by an enthusiastic a cappella group at a Chick-fil-A in Nashville earlier this month.

Fox News reports that, in footage shared to Facebook on July 4, dozens of members of the Acapella Ministries Worship Leader Institute can be seen breaking out in song – specifically, Bill Withers’ “Lean on Me” – in the Chick-fil-A dining room, much to the delight of the unsuspecting fast-food patrons and on-duty team members.

By the clip’s end, both customers and staffers had joined in on the fun, singing and clapping along with the performance.

The video, originally shared by Jake Jones, had amassed nearly a million views as of Monday.

“Awesome! Glory to God! These be my brothers!” one commenter wrote.

“I have the chills!” another added.

“Whenever you get a group of a cappella worship leaders together it’s hard for us not to sing together,” Jones says.

Jones added that this rendition of “Lean On Me” was arranged by Acappela Company President Keith Lancaster as a four-part harmony.

“The flash mob was planned to encourage patrons and employees at the Chick-Fil-A,” Jones explains. We’ve noticed every time we do something like this, people comment on the videos saying, ‘This is just what I needed,’ ‘We need more of this,’ and ‘Why can’t we have more of this in the world?’ We never know who will be touched through this.

“We feel it is our mission in life to spread God’s awesome news through the talents and gifts He’s given us,” he adds. “What better way than to lift people up in song!”

This wouldn’t be the first time a group of talented singers chose Chick-fil-A for a spontaneous performance. In July of 2018, singers attending the same conference treated patrons of a Chick-fil-A – also in Nashville – to a harmony-packed version of Hezekiah Walker’s “Every Praise.”

“This year there were too many of us to fit into one Chick-fil-A — we spread out into two groups,” said Jones, who said about 90 members went to this year’s event, which drew attendees from all over the world.

5 thoughts on “VIDEO Worship group stops at Chick-fil-A, busts out viral rendition of ‘Lean on Me’”