This overlooked group is more isolated than you realize.
SHERIDAN VOYSEY 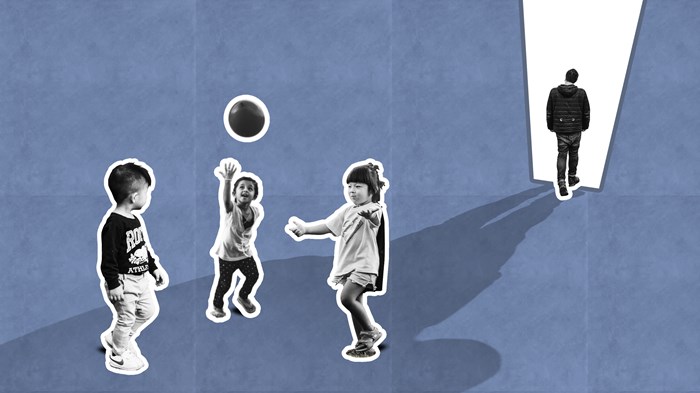 “Hi, Sheridan. I hope you don’t mind me, a complete stranger, contacting you, but I can’t talk to my family or friends about this.”

“I am a church youth worker, and my wife just showed me your book. I hope you don’t mind me asking, but could we meet? I feel so lost.”

“I can’t think of anyone to turn to. I feel embarrassed and ashamed.”

Brad, Neil, and Simon (as I’ll call the men who reached out to me with these introductions) weren’t contacting me to confess some secret sin or addiction. The burden they carry is childlessness. For Brad and his wife, six years of trying to conceive had produced only heartache. For youth worker Neil, multiple failed in vitro fertilization (IVF) rounds left him questioning his faith. And Simon feels responsible for the agony his wife feels with every period and negative pregnancy test. With infertility rates rising, these men are not alone in their situation. But they are isolated.

A recent study from Leeds Beckett University confirms that infertility can negatively impact a man’s mental health, self-esteem, relationships, career, and finances. With masculinity in our culture tied so closely to raising children and infertility often viewed as a “women’s issue,” men in this situation often face the crisis alone—even in their churches.

We can help them.

For 10 years, my wife, Merryn, and I tried to start a family. Our journey included special diets, healing prayer, rounds of IVF, and a year of assessment as potential adoptive parents followed by an agonizing two-year wait for our hoped-for adoptive child. We pursued our dream with all the energy we had, but it never materialized. Exhausted from a decade in the infertility wilderness, we brought our dream to an end on Christmas Day 2010 after doctors had told us, just days before, that our final IVF round had been successful. They’d been wrong.

I shudder when I recall the isolation of those years. I didn’t want to talk about our infertility—it was a large, dark topic I preferred to ignore rather than face, and I couldn’t think of anyone to open up to who would have any idea what I was experiencing. My feelings grew deep and complex.

Those feelings included guilt. As I watched my wife’s face contort in pain as the needle extracted the eggs for an IVF round, or as I held her as she sobbed when her hopes were dashed yet again, I felt guilt that I was the biological reason she couldn’t have what she desperately wanted. I felt sadness too, especially when I saw fathers playing with their giggling sons or watched proud dads walk their veiled daughters down the aisle. And there was jealousy and confusion. When news reports came of neglected children or another infertile couple announced their “miracle” pregnancy, I wondered why the abusive folks got the kid or why God answered others’ prayers but not mine.

While Merryn and I didn’t get the happy ending we wanted, we have seen our wilderness transformed into something redemptive. Prompted by a friend, I wrote a book about our experience called Resurrection Year, then followed it up with The Making of Us, a book exploring who we can become when life doesn’t go as planned. I started speaking at conferences on redeeming broken dreams. The media—fascinated by a man talking about a “women’s” topic—started calling. As a result, men like Brad, Neil, and Simon started reaching out to me.

Four Things You Can Do

After speaking at a large church one Sunday on this theme, the pastor joined me on stage to close the service. “How many of you have been touched by infertility personally or through a family member?” he asked the congregation. In the anonymity of a large crowd, many hands went up, surprising the pastor at the extent of the need. Most of the hands were women’s.

But after the service, men approached me—in a quiet corner of the building, out in the car park, asking if they could have a word. I wondered what would happen if their isolation were broken, they came together, and the circle of their comradery grew to reach other childless men in their community. What a ministry to an unreached people group that could be!

Men like Brad, Neil, and Simon are sitting in your church. Hundreds more like them are in your community, lacking a space to talk, get support, or find God in their wilderness. Reaching them is a pastoral and missional opportunity. Here’s how you can connect.

While writing this article, a pastor’s words popped up in my Twitter feed: “Moving from son to husband and father is the essence of manhood. #manup.” I’m sure the pastor was trying to echo Genesis 1:28’s mandate to multiply while calling men to responsibility and self-sacrifice, but I wonder if he considered how his words would affect men like me. Plenty of married fathers shirk responsibility while plenty of single and childless men live self-sacrificial lives. On this definition, wifeless-and-childless Jesus lacked the “essence” of manhood, and Paul even taught against it (1 Cor. 7:32–35). I wonder if the pastor would tell Jesus and Paul to “#manup” too.

Sadly, some approaches to masculinity in the church subtly reinforce the idea that men aren’t truly men until they’ve married and had children. What assumptions about the essence of manhood do you hold? Scripture talks less about masculinity than it does maturity—becoming Christlike—a call applicable to father and non-father alike (Eph. 4:13, Gal. 5:22–23). This is a bigger vision of masculinity than “man-up manhood” and it is the best grounds on which to reach out to men like Brad, Neil, and Simon.

2. Prepare to meet him in the shadows.

“I feel embarrassed and ashamed,” Simon said. This is a common experience for men facing infertility, even when they are not the biological cause of the problem. Don’t expect Simon to publicly respond anytime soon to an altar call for prayer in a Sunday service. If you want to address the topic of childlessness from the pulpit (and please do), invite affected men to email you privately. Research shows they will respond to confidential opportunities like this as well as closed online forums. Simon won’t likely come to a small group for men struggling with infertility—not yet. This begins as one-to-one pastoral ministry. You will likely need to meet him in the shadows before he will come into the light.

“I have so many questions about why this isn’t happening for us,” Neil told me, “and what we should try next.” For Neil, these questions included the ethics of using donor eggs or donor sperm, whether an adopted child would ever feel like “his own,” plus age-old questions about God and suffering. This is hard terrain to navigate, one I have seen precipitate theological shifts into unorthodox territory when people lack pastoral guidance.

Yet this is a pivotal discipleship opportunity for Neil and men like him. You can help him find answers by making space for his questions, helping him locate resources and advice, linking him with other involuntarily childless men, and journeying alongside him as he, like Job, encounters a bigger revelation of God through his pain.

4. Show him a deeper identity.

“All my friends are fathers and grandfathers,” another man told me. “And me? I’m nothing.” When infertility robs you of being a father, what else can you become? This can be a key question for infertile men.

Our Western tendency to define ourselves by our jobs or parenting status ultimately truncates who we are. This man may not be a father, but he is a husband, son, uncle, citizen, and friend—identities that can be forgotten when focusing hard on becoming a parent. One of infertility’s gifts to me has been discovering a bigger sense of self—resting more deeply in my identity as God’s child, rediscovering the importance of being a friend, realizing my character is a more important facet of my identity than my career path, and more. In time you will have opportunities to help these men discover that it’s often when we lose an identity that we can discover who we most deeply are.

Sheridan Voysey is a writer, speaker, and broadcaster, regularly contributing to the BBC and other international networks. His latest book is The Making of Us: Who We Can Become When Life Doesn’t Go as Planned (Thomas Nelson, 2019).