Latest move to take Christianity out of society 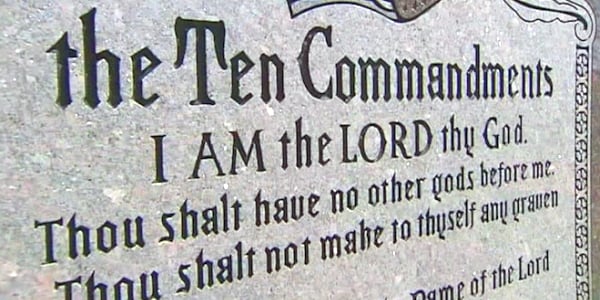 There have a number of times around the United States in recent years that the 10 Commandments have been ordered to be taken down.

Like in the judicial building in the state of Alabama. And sometimes in schools.

Actually, under the law in most cases, the biblical injunctions are considered part of the history of the nation and can be posted as long as there are other historical documents or sayings posted with them.

Now, however, another government has ordered the 10 Commandments taken down.

According to a report from the worldwide Christian ministry to persecuted church members, Barnabas Aid, China’s authorities have said they have to come down.

And they’ll be replaced with quotations from President Xi.

The report said the move already is taking effect for churches in China’s central province of Henan.

“Every state-registered ‘three-self’ church and meeting venue in one county of Luoyang, a prefecture-level city, received an order to remove the ten biblical commandments from display as part of the authorities’ on-going campaign to ‘sinicise’ (make Chinese) Christianity,” the report said.

“Some churches that refused to obey have been shut down and other congregations have been told their members will be ‘blacklisted,’ meaning the travel, education and employment options of Christians will be restricted by the authorities,” the report continued.

The ministry, which is at work in more than 60 nations around the globe, mostly where Christianity is marginalized or persecuted, said a pastor from a state-registered church told the Bitter Winter publication the replacement is a copy of excerpts from Xi Jinping’s speeches.

The churches also have faced orders to replace their crosses with the Chinese flag and the installation of surveillance cameras to spy on members.

China’s efforts to exorcise “God” from society haven’t stopped with actions against churches, although in one extreme case “authorities ordered a registered church in Dongcun village, Henan province to erase the First Commandment, ‘You shall have no other gods before me,’ from the Ten Commandments on display in front of the pulpit, saying it was ‘national policy.'”

The country also has ordered the words “Bible, “God” and “Christ” removed from classic novels such as Robinson Crusoe.