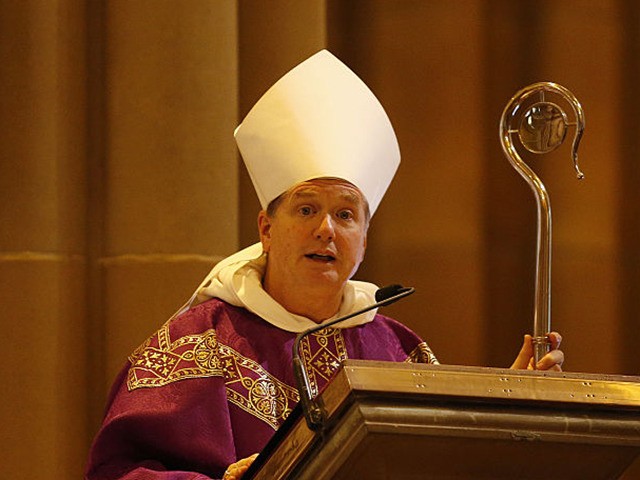 “As desires change, we can revise our bodies surgically or our beliefs ideologically,” the archbishop said. “But reducing ourselves to our tastes or to a single attribute risks neglecting other important things about us.”

“Amidst celebrity adulation and identity politics, narcissism is now endemic. Too much focus on identity can be distorting,” he warned.

Preaching to a standing room-only crowd of some 2,000 Catholics at St. Mary’s Cathedral Wednesday morning, Fisher said that the modern “era of liquid personality” and “self-generated identities” runs counter to people’s true identities before God.

“Some of our I.D. comes from family, nation and culture,” he said. “But modernity prefers self-generated identities. Much of it is said to be about what we identify with.”

“Sometimes it’s just code for self-indulgence,” Fisher declared. “We humor our preferences with the excuse ‘it’s who we are.’ No need to abide by laws of faith and reason, or to compromise to the needs of others.”

Much of the archbishop’s homily seemed aimed at modern theories of gender identity, which propose that a person’s sexual identity is fluid rather than biologically anchored and that sexual orientation is the defining attribute of personal identity.

Fisher said there were “forces” seeking to marginalize the Christian identity in particular, which require a recommitment to the faith from believers.

“If we are confused about values and vocation, we’ll be disinclined to plan or commit. Disengaged from family, Church and society, we fall easy prey to isolation or extremism,” he said.

“Forces threaten our identity and even our existence from the first moment of conception. Some seek to marginalize Christian identity in particular,” he said.

At the same time, people continue to seek God and his truth, the archbishop suggested, as evidenced by the presence of so many at Christmas Mass.

“But your presence here today speaks volumes. It says that our core identity as Christians graces us to be, not just better believers, but better friends and lovers, children and parents, citizens and colleagues,” he said.

In the end, Christmas brings a message of salvific love and turning to Christ means looking for our redemption — and our identity — in Him.

“To call Him our Saviour is to say we need saving – from sin, death, enemies, even ourselves,” Fisher said. “We need liberation – from vices, addictions, all that cages our spirit.”

“To call Him Son, Grace and Glory of God, is to acknowledge that we need a power greater than ourselves. To call Him Wonder-Counsellor, Almighty God and Prince of Peace is to recognize that He has remade us as the wisdom, peace and glory of God,” he said.