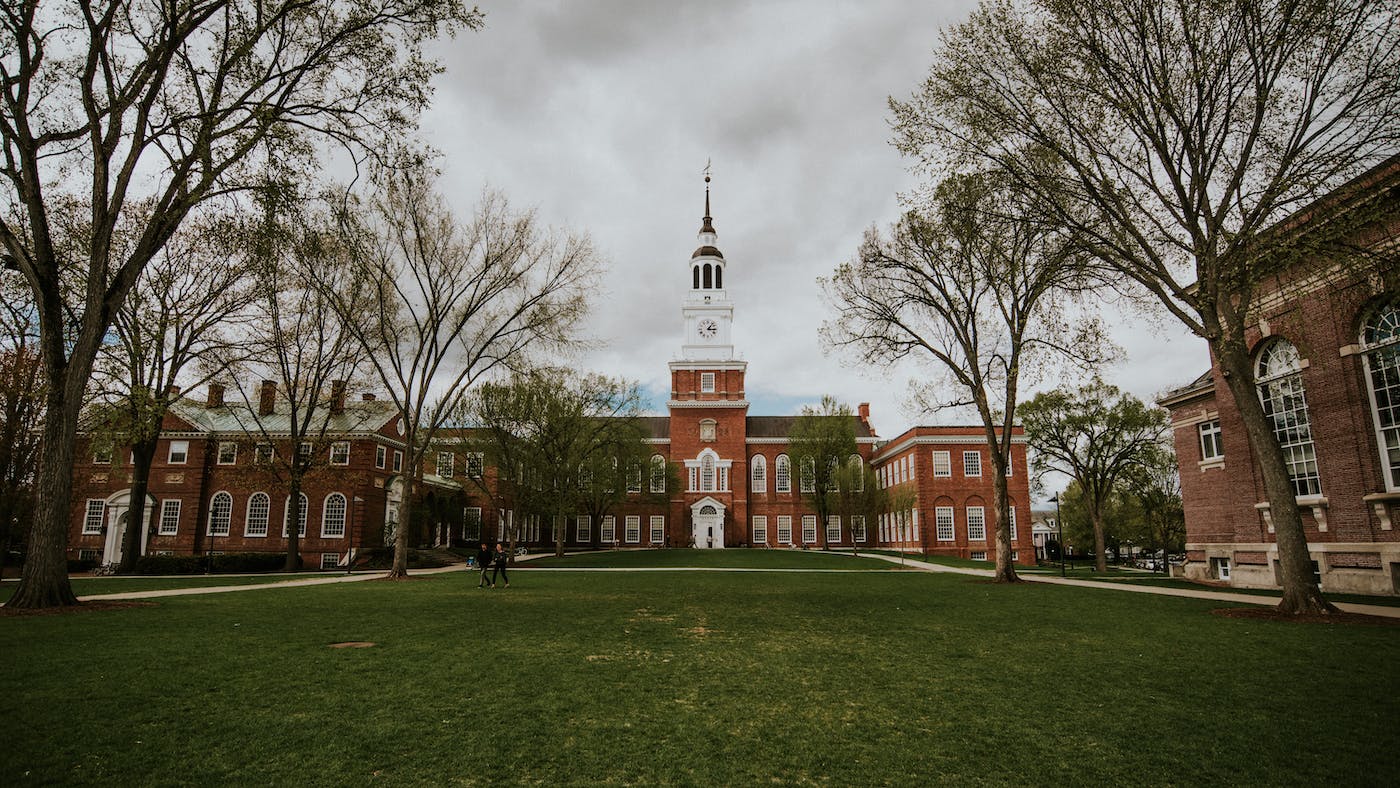 I attended a secular college that, by and large, did not believe what I did — and I am thankful for the experience. The ideas and people informed, challenged, and refined me in ways I still daily recognize and appreciate today.

Yet for all the knowledgeable instruction I received, year by year, I also felt the increasingly strong but subtle persuasions of human doctrine, cunning, and craftiness (Ephesians 4:14). The winds of arguments and opinions raised against the knowledge of God (2 Corinthians 10:5) blew through classrooms, campus demonstrations, school publications, student organizations, and hallway conversations.

Even for us who follow Christ, these persuasive lies can be disorienting if we’re not prepared for them. If we keep up our guard and ready our minds, however, steadfastly oriented to the truth, even their lies can refine our faith and position us to be the salt of the earth and the light of the world (Matthew 5:13–14).

Four Lies I Fought on Campus

If we are to step onto college campuses and influence them towards Christ (and not allow them to influence us towards the world), we must go prepared. The classroom and college environment can be a dangerous place for Christians, especially young believers. In hopes of preparing all of us to face and resist the dangers, below are four lies I learned to combat on my college campus.

From the first day of an English or science class, professors often frame the semester’s curriculum on the divisive assumption that some people have faith, and some do not. Typically, this assumption posits faith in God against naturalism or atheism, as if the latter worldviews don’t require various beliefs themselves.

In reality, these theories posit feebly founded beliefs concerning the origin of the universe, the meaning of life, the experience of awe or wonder, the basis of human dignity, and the rationale for any universal moral standard defining wrong as wrong. Scientific observation alone did not produce many of their conclusions.

Among a host of other faith-based claims, nearly everyone we meet will also propose belief in forces we cannot see physically. I never had a professor deny the existence of the invisible. Each one embraced the reality of atoms, wind, magnetism, gravity, and the expanses of the galaxy, all of which are imperceptible to the human eye. We believe in these forces by perceiving their effects and searching for the cause — just as God is now invisible to us, but we believe in him by his works (Romans 1:19–20). Furthermore, each professor trusted in historical accounts of all kinds of people and events for which we have far less corroborating early witnesses than the Bible.

“The courage, drive, and creativity of college students position them for stunning influence on the world.”

Ultimately, when it comes to faith in Christ, the issue is not a lack of credible evidence, but an inclination to suppress, by our own unrighteousness, what God has already made plain to us (Romans 1:18–19).

Others suggest our inclinations towards certain views automatically rule them unreliable. They may accuse the influence of family, culture, and experiences of encouraging us towards our beliefs — and they may be right. But if these influences compelled us to believe the earth was round, would that make it any less true? And would it make us bigoted and narrow-minded to share the reasons for our belief with classmates taught from childhood that the earth is flat?

We should absolutely examine everything we are compelled to believe, testing the trustworthiness of each claim against what God has revealed (1 Thessalonians 5:21; Acts 17:11). But we should resist the lie that our inclination to believe something necessarily makes it untrue. To simply suggest that personal experiences bias us towards a certain belief is a belief biased on personal experiences. Jesus Christ is truth itself (John 14:6) and taught that people of the truth will listen to and believe his voice (John 18:37).

Some embrace the necessity of faith and the reality of absolute truth but instruct us to look internally rather than externally to find them. Many student groups and movements on college campuses herald the message that life’s noblest pursuit and only hope for contentment is to “live your truth” as “you do you” and “follow your heart” — namely, to use any and all desires of your flesh to define your identity, judge morality, and justify behavior without shame.

This crusade veils the underlying temptation our enemy has baited for centuries: to give ourselves up to sensuality, lust, and impurity that we might become callously hardened in heart (Ephesians 4:18–19; Romans 1:24–25). Deceived into seeing God’s boundaries as stifling joy rather than lavishing it in abundance, we are continually encouraged to seek the world’s enticements apart from him to satisfy us instead.

“The question is not whether we will have faith, but in what we will place our faith.”

And yet, at the bottom of every bank account, with despair over unattainable standards of beauty, in the lonely halls of fame, and at sunrise after each destructive party remains the stomach-sinking bleakness of discovering this world cannot satisfy us after all. When we are more anchored in and governed by the shifting sands of what we feel than by the rock of what is true, the enemy corners us into the emptiness of sin, the anxiety of helplessness, and the exhaustion of discontent.

Scripture warns that governing life by the inward gaze, far from enlightening us, actually darkens our understanding and alienates us from the life of God (Ephesians 4:17–18). It is in our creator that we live and move and have our being (Acts 17:28), and it is his desires, not our own contradicting ones, that are good, trustworthy, and enduring to the end.

The courage, drive, creativity, and technological innovation of college students position them for stunning influence on the world — one of many reasons the church greatly benefits from investing in and being sharpened by them.

In my own college days, I was ignited for adventure by the open horizon of possibilities — particularly those that beckoned me to lay down my life for the world’s eternal good. But I also saw many drawn into the cultural current of popular opinion in ways that contradicted God’s word. Masked as “the way of progress” and “the right side of history” this is actually the wide, broad path that leads to destruction (Matthew 7:13). As C.S. Lewis warned decades ago,

If you are on the wrong road, progress means doing an about-turn and walking back to the right road; and in that case, the man who turns back soonest is the most progressive man. . . . It is pretty plain that humanity has been making some big mistake. We are on the wrong road. And if that is so, we must go back. Going back is the quickest way on.

“The classroom and college environment can be a dangerous place for young Christians.”

In every phase of life, we should be courageous to fight the good fight of the faith (1 Timothy 6:12) — not ultimately against the people we’re called to love, but against the spiritual forces of evil over this present darkness (Ephesians 6:12). And in response to any mocking or belligerent opposition, we can take heart remembering we seek the reward not of human praise in this life, but of God’s good pleasure in the one to come (Galatians 1:10).

Let No One Deceive You

Let no one deceive you in any way (2 Thessalonians 2:3). Don’t place your faith and hope in educated professors. Don’t be persuaded by the ever-shifting arguments of unbelieving peers on your social-media feed. Don’t be discouraged by smug expectations that secularism and science are squelching our world’s hunger and need for God. And don’t be surprised by fiery trials as you stand on your beliefs (1 Peter 4:12).

Instead, look especially to wise professors of the faith — the inspired authors of Scripture, faithful leaders of your church, witnesses running alongside you (Hebrews 12:1), and the Word of God himself, Jesus Christ (John 1:1). Pray for wisdom (James 1:5). Then become a professor and witness of the truth yourself. And ultimately, radiate a joy proving you’ve found the treasure of truth worth forsaking all else (Matthew 13:44), proving by your love the truth you believe (John 13:35).