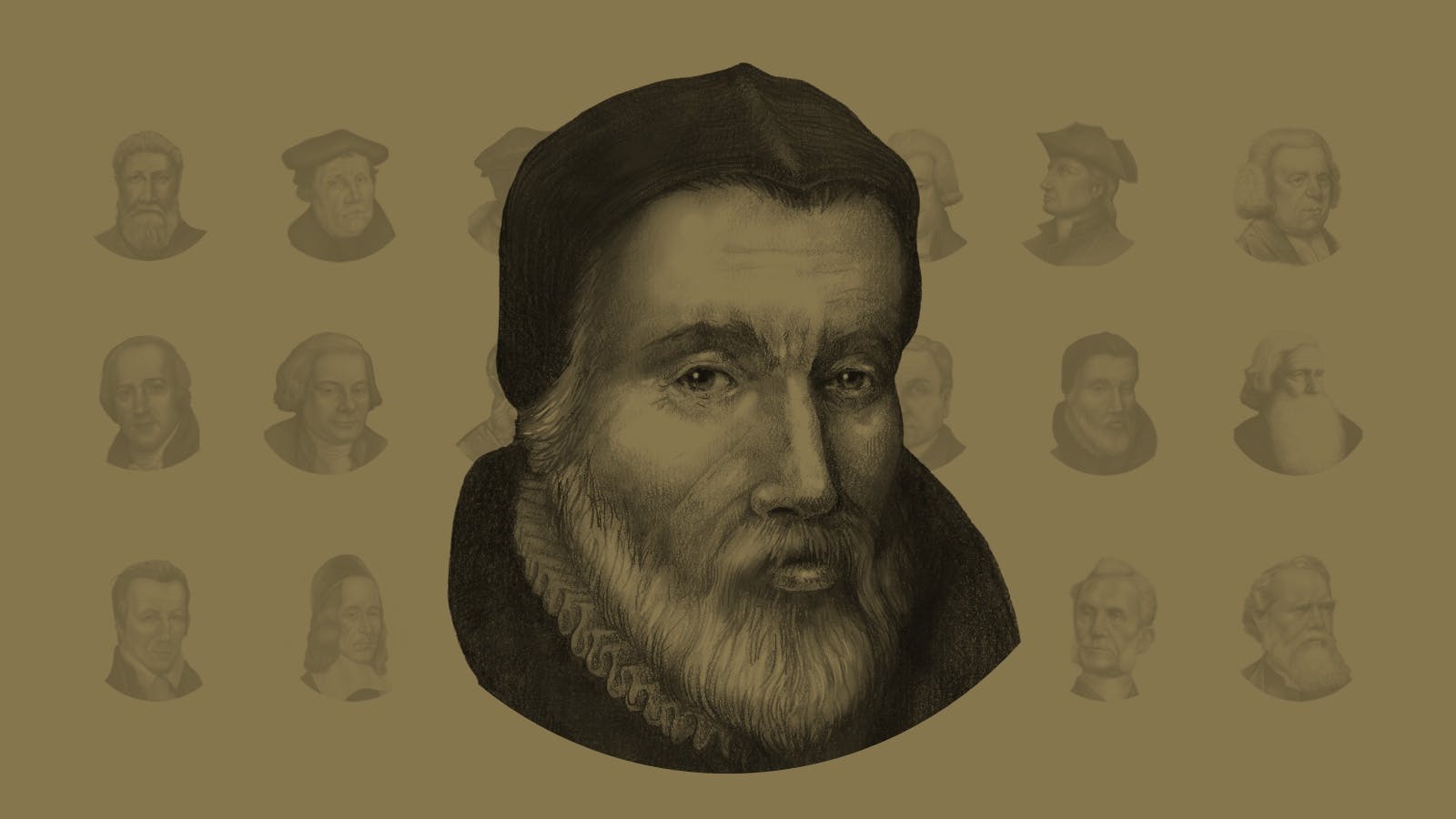 Stephen Vaughan was an English merchant commissioned by Thomas Cromwell, the king’s adviser, to find William Tyndale and inform him that King Henry VIII desired him to come back to England out of hiding on the continent. In a letter to Cromwell from Vaughan dated June 19, 1531, Vaughan wrote about Tyndale these simple words: “I find him always singing one note” (David Daniell, William Tyndale: A Biography, 217). That one note was this: Will the King of England give his official endorsement to a vernacular Bible for all his English subjects? If not, Tyndale would not come. If so, Tyndale would give himself up to the king and never write another book.

This was the driving passion of his life — to see the Bible translated from the Greek and Hebrew into ordinary English available for every person in England to read.

Henry VIII was angry with Tyndale for believing and promoting Martin Luther’s Reformation teachings. In particular, he was angry because of Tyndale’s book Answer to Sir Thomas More. Thomas More was the Lord Chancellor who helped Henry VIII write his repudiation of Luther called Defense of the Seven Sacraments. More was thoroughly Roman Catholic and radically anti-Reformation, anti-Luther, and anti-Tyndale. So Tyndale had come under excoriating criticism by More.

But in spite of this high-court anger against Tyndale, the king’s message to Tyndale, carried by Vaughan, was mercy: “The king’s royal majesty is . . . inclined to mercy, pity, and compassion” (William Tyndale, 216). The 37-year-old Tyndale was moved to tears by this offer of mercy. He had been in exile away from his homeland for seven years. But then he sounded his “one note” again: Will the king authorize a vernacular English Bible from the original languages?

The king refused. And Tyndale never went to his homeland again. Instead, if the king and the Roman Catholic Church would not provide a printed Bible in English for the common man to read, Tyndale would, even if it cost him his life — which it did five years later.

The Plowboy Will Know His Bible

When he was 28 years old in 1522, he was serving as a tutor in the home of John Walsh in Gloucestershire, England, spending most of his time studying Erasmus’s Greek New Testament that had been printed just six years before. We should pause here and make clear what an incendiary thing this Greek New Testament was in history. David Daniell describes the magnitude of this event:

This was the first time that the Greek New Testament had been printed. It is no exaggeration to say that it set fire to Europe. Luther translated it into his famous German version of 1522. In a few years there appeared translations from the Greek into most European vernaculars. They were the true basis of the popular reformation. (Tyndale, Selected Writings, ix)

Every day, William Tyndale was seeing these Reformation truths more clearly in the Greek New Testament as an ordained Catholic priest. Increasingly, he was making himself suspect in this Catholic house of John Walsh. Learned men would come for dinner, and Tyndale would discuss the things he was seeing in the New Testament. John Foxe tells us that one day an exasperated Catholic scholar at dinner with Tyndale said, “We were better be without God’s law than the pope’s.”

In response, Tyndale spoke his famous words, “I defy the Pope and all his laws. . . . If God spare my life ere many years, I will cause a boy that driveth the plow, shall know more of the Scripture than thou dost” (William Tyndale, 79).

Four years later Tyndale finished the English translation of the Greek New Testament in Worms, Germany, and began to smuggle it into England in bales of cloth. He had grown up in Gloucestershire, the cloth-working county, and now we see what that turn of providence was about. By October 1526, the book had been banned by Bishop Tunstall in London, but the print run had been at least three thousand. And the books were getting to the people. Over the next eight years, five pirated editions were printed as well.

In 1534, Tyndale published a revised New Testament, having learned Hebrew in the meantime, probably in Germany, which helped him better understand the connections between the Old and New Testaments. Biographer David Daniell calls this 1534 New Testament “the glory of his life’s work” (William Tyndale, 316). If Tyndale was “always singing one note,” this was the crescendo of the song of his life — the finished and refined New Testament in English.

What drove Tyndale to sing “one note” all his life was the rock-solid conviction that all humans were in bondage to sin, blind, dead, damned, and helpless, and that God had acted in Christ to provide salvation by grace through faith. This is what lay hidden in the Latin Scriptures and the church system of penance and merit. The Bible must be translated for the sake of the liberating, life-giving gospel.

There is only one hope for our liberation from the bonds of sin and eternal condemnation, Tyndale said: “Neither can any creature loose the bonds, save the blood of Christ only” (Selected Writings, 40).

By grace . . . we are plucked out of Adam the ground of all evil and graffed [sic] in Christ, the root of all goodness. In Christ God loved us, his elect and chosen, before the world began and reserved us unto the knowledge of his Son and of his holy gospel: and when the gospel is preached to us [it] openeth our hearts and giveth us grace to believe, and putteth the spirit of Christ in us: and we know him as our Father most merciful, and consent to the law and love it inwardly in our heart and desire to fulfill it and sorrow because we do not. (Selected Writings, 37)

This is the answer to how William Tyndale accomplished what he did in translating the New Testament and writing books that set England on fire with the Reformed faith. He worked assiduously, like the most skilled artist, in the craft of compelling translation, and he was deeply passionate about the great doctrinal truths of the gospel of sovereign grace.

Man is lost, spiritually dead, condemned. God is sovereign; Christ is sufficient. Faith is all. Bible translation and Bible truth were inseparable for Tyndale, and in the end it was the truth — especially the truth of justification by faith alone — that ignited Britain with Reformed fire and then brought the death sentence to this Bible translator.

Burned for the Bible

It is almost incomprehensible to us today how viciously the Roman Catholic Church opposed the translation of the Scriptures into English. Tyndale, who escaped from London to the European continent in 1524, watched a rising tide of persecution and felt the pain of seeing young men burned alive who were converted by reading his translation and his books.

His closest friend, John Frith, was arrested in London and tried by Thomas More and burned alive on July 4, 1531, at the age of 28. Richard Bayfield ran the ships that took Tyndale’s books to England. He was betrayed and arrested, and More wrote on December 4, 1531, that Bayfield “the monk and apostate [was] well and worthily burned in Smythfelde” (Brian Moynahan, God’s Bestseller, 260).

Three weeks later, the same end came to John Tewkesbury. He was converted by reading Tyndale’s Parable of the Wicked Mammon, which defended justification by faith alone. He was whipped in More’s garden and had his brow squeezed with small ropes until blood came out of his eyes. Then he was sent to the Tower where he was racked till he was lame. Then at last they burned him alive. More “rejoiced that his victim was now in hell, where Tyndale ‘is like to find him when they come together’” (God’s Bestseller, 261).

Four months later, James Bainham followed in the flames in April 1532. He had stood up during the mass at St. Augustine’s Church in London and lifted a copy of Tyndale’s New Testament and pleaded with the people to die rather than deny the word of God. That virtually was to sign his own death warrant. Add to these Thomas Bilney, Thomas Dusgate, John Bent, Thomas Harding, Andrew Hewet, Elizabeth Barton, and others, all burned alive for sharing the views of William Tyndale about the Scriptures and the Reformed faith.

What did it cost William Tyndale under these hostile circumstances to stay faithful to his calling as a translator of the Bible and a writer of the Reformed faith?

He fled his homeland in 1524 and was burned at the stake in 1536. He gives us some glimpse of those twelve years as a fugitive in Germany and the Netherlands in one of the very few personal descriptions we have, from Stephen Vaughan’s letter in 1531. He refers to

. . . my pains . . . my poverty . . . my exile out of mine natural country, and bitter absence from my friends . . . my hunger, my thirst, my cold, the great danger wherewith I am everywhere encompassed, and finally . . . innumerable other hard and sharp fightings which I endure. (William Tyndale, 213)

All these sufferings came to a climax on May 21, 1535, in the midst of Tyndale’s great Old Testament translation labors. We can feel some of the ugliness of what happened in the words of Daniell: “Malice, self-pity, villainy, and deceit were about to destroy everything. These evils came to the English House [in Antwerp], wholly uninvited, in the form of an egregious Englishman, Henry Philips” (William Tyndale, 361). Philips had won Tyndale’s trust over some months and then betrayed him to the authorities, who locked him in Vilvorde Castle, six miles north of Brussels. Here Tyndale stayed for the final eighteen months of his life.

Cost of Spreading the Gospel

Tyndale’s verdict was sealed in August 1536. He was formally condemned as a heretic and degraded from the priesthood. Then in early October (traditionally October 6), he was tied to the stake and then strangled by the executioner, then afterward consumed in the fire. Foxe reports that his last words were, “Lord, open the King of England’s eyes!” He was 42 years old, never married, and never buried.

His closing words to us are clear from his life and from his writings. Following God’s call in accomplishing the spread of his saving gospel is often very costly. I will let him speak in his own words from his book The Obedience of a Christian Man:

If God promise riches, the way thereto is poverty. Whom he loveth he chasteneth, whom he exalteth, he casteth down, whom he saveth he damneth first; he bringeth no man to heaven except he send him to hell first. If he promise life, he slayeth it first; when he buildeth, he casteth all down first. He is no patcher; he cannot build on another man’s foundation. He will not work until all be past remedy and brought unto such a case, that men may see how that his hand, his power, his mercy, his goodness and truth hath wrought all together. He will let no man be partaker with him of his praise and glory. (6)

So let Tyndale’s very last word to us be the last word he sent to his best friend, John Frith, in a letter just before Frith was burned alive for believing and speaking the truth of Scripture (recorded in Foxe’s Book of Martyrs):

Hereby have we perceived love, that he had lain down his life for us; therefore we ought also to lay down our lives for the brethren. . . . Let not your body faint. . . . If the pain be above your strength, remember, Whatsoever ye shall ask in my name, I will give it you. And pray to our Father in that name, and he will ease your pain, or shorten it. . . . Amen.