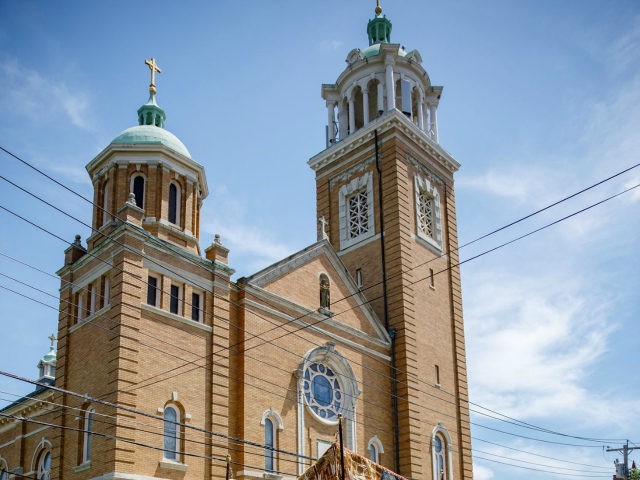 “St. Joseph’s Church … was vandalized this week, as an unknown individual or individuals painted ‘satanic’ and ‘anarchist’ symbols on its doors,” reports the New Haven Register.

According to St. Joseph’s pastor, Rev. John Paul Walker, the church was desecrated using pink paint, including a pentagram and the symbol for anarchy.

Between the hours of 9 PM last night and 6 AM this morning, a person or group of persons had painted anarchist and satanic symbols on the doors of St. Joseph Church in New Haven. This follows an apparent trend of desecrating Catholic spaces throughout the nation, as evidenced by incidents in Chattanooga, Queens, Boston, Sacramento, and Ocala. The underlying motive of these sacrilegious attacks is clear: to intimidate and instill fear in the hearts of those who worship Christ.

After being shut down on Thursday, Walker said the church reopened Friday after being blessed with an exorcism prayer.

Walker told the New Haven Register that the vandalism occurred after “a disruptive individual had attended services in the days leading up to the incident, prompting calls to police.” Police confirmed a call about the disruptions.

The “apparent trend of desecrating Catholic spaces” referred to in the St. Joseph Facebook post is becoming a little more than apparent.

Here’s the rundown of attacks on the Christian church over just the last two months — ten in the last month — which coincides with the lawless rioting, vandalism, and looting at the hands of the corporate media’s and Democrat Party’s Brownshirts in the left-wing Black Lives Matter and Antifa terrorist groups:

July 16: Statue of Christ decapitated inside a Florida church

July 12: Statue of Virgin Mary lit on fire in Boston

July 11: Suspect arrested after detectives “say he plowed a minivan through the front door of Queen of Peace Catholic Church in Ocala, doused the foyer with gasoline and set it on fire, causing extensive damage”

St. Junipero Serra is a specific target — he founded the San Gabriel Mission 249 years ago — because of the lies going around about his treatment of missionary Indians at the time. The truth is that St. Junipero risked his life to bring God to the North American natives and even confronted his own government about their treatment. The smears against him are nothing short of a blood libel.

Anyway, remember when we were attacked as hysterics after we warned this madness would not stop with Confederate statues and monuments?

Once you allow any kind of lawlessness, it becomes a Pandora’s box. The establishment media and Democrats know this, which is why they applauded the tearing down of Confederate statues and then attempted to gaslight the public into believing it would stop there. The Church was always the ultimate target, which is why the media are now encouraging these attacks by ignoring them.