3,500-seat sanctuary packed with no social distancing or masks 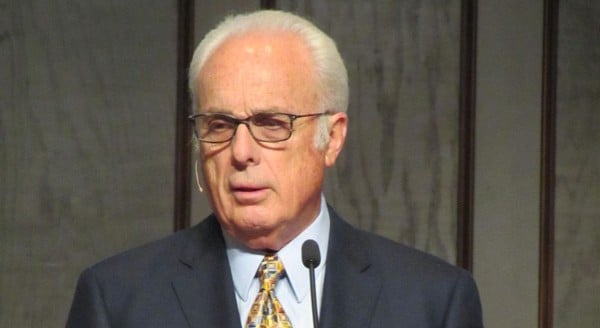 Defying a Los Angeles County public-health order, worshipers packed the 3,500-seat sanctuary of John MacArthur’s Grace Community Church on Sunday hours after an appeals court blocked a judge’s ruling that would have allowed the church to gather legally.

MacArthur, told the Sun Valley congregation he has led for 50 years that “the powers of the city were not happy” about the church’s lawsuit filed last week, the Washington Times reported.

“They don’t want us to meet, that’s obvious,” MacArthur said from the pulpit. “They’re not willing to work with us. They just want to shut us down. But we’re here to bring honor to the Lord.”

The pastor, known nationally for his many bestselling books and longtime radio show, said “we’re not meeting because want to be rebellious, we’re meeting because our Lord has commanded us to come together and worship Him.”

TRENDING: The burning question: Are there enough lampposts?

John MacArthur's opening remarks as Grace Community Church worships in defiance of the local and state government in Southern California. (1 of 2) pic.twitter.com/rdCDq9YUZQ

A full hearing was scheduled for Sept. 4, and in the meantime the church agreed the congregation would practice social distancing and wear facial coverings.

However, late Saturday night, the California Court of Appeal issued a stay of the judge’s order, ruling the dangers of COVID-19 outweigh the right to hold services.

“They were going to be asking us to do two things, social distance and wear masks,” MacArthur explained. “We agreed, [saying] look, we’ll comply for a few weeks. They asked that for three weeks. We’re not wanting to be defiant. We will do what is reasonable. That was not enough for the city. They went to the appellate court Saturday late, and had that order removed.”

On Sunday, the congregation gathered anyway, and without social distancing and masks.

Los Angeles County said in a statement it was “pleased that the California Court of Appeal recognizes the vital importance of our Health Officer Orders in protecting the lives and health of our residents as we work to slow the spread of the deadly COVID-19 virus.”

“Grace Community Church is doing exactly what they have for 63 years—holding church,” said Thomas More attorney Jenna Ellis. “They have tried to be reasonable and work with L.A. County, but the County would not accept anything short of shutting down the Church entirely.”

“This isn’t about health. Pastor MacArthur simply held church, and the California and US constitutions protect his right to do that. He is rightly standing firm that church is essential,” she said.

Grace Community re-opened its doors in late July after closing in mid-March due to the coronavirus pandemic.

After re-opening, MacArthur told CNN last Tuesday, people “started slowly coming back, and they just kept coming until there were six or seven thousand.”

On Sunday, Aug. 9, the church gathered, as CNN reported, in “tightly packed rows” and most, if not all, were “maskless.”

“I’m so happy to welcome you to the Grace Community Church peaceful protest,” MacArthur said from the pulpit.

On Thursday, the church’s lawyers announced they had filed a lawsuit challenging the restrictions on indoor services.

Later that day, Los Angeles County sued MacArthur and his church for continuing to “hold in-person, indoor worship in violation of the State and County public health orders.”

The county said in a statement that it “took this action reluctantly after working with the church for several weeks in hopes of gaining voluntary compliance with the Health Officer Orders, which allow for religious services to be held outdoors in order to slow the spread of a deadly and highly contagious virus.”

The pastor told CNN that no members of his megachurch had contracted the virus. Los Angeles County was reporting 1,500-2,000 new COVID-19 infections a day. MacArthur said he doubted the accuracy of the state’s coronavirus numbers.

“We open the doors because that’s what we are,” he said. “We’re a church, and we’re going to trust those people to make adult decisions about the reality of their physical and spiritual health.”

CNN cited a recent survey finding 6% of Americans who regularly attend services say their congregation is operating as usual.

MacArthur has drawn both support and criticism from other evangelical pastors.

Ronnie Floyd, who leads the Southern Baptist Convention’s executive committee, tweeted: “I’m praying for and thankful for Dr. John MacArthur (and) other pastors across the country who are facing government encroachment on the fundamental rights to free exercise of religion and freedom of assembly.”

Brad Littlejohn, president of Davenant Institute, a collection of Reformed Protestant scholars, CNN reported, wrote a 7,500-word rebuttal to MacArthur earlier this month. Littlejohn contended the pastor is endangering his congregation and possibly leading other leaders astray by his example.

“Rev. MacArthur no doubt believes he is taking a courageous stand,” Littlejohn wrote. “I fear that he is rather a confused shepherd, leading countless sheep straight into the line of fire.”

John MacArthur holds megachurch service after court rules against him

Obey God rather than man

Obeying God is of utmost importance to every Christian, for our lives are from God. God provides us with our daily needs of food and drink, and has led us unto today. His love for us is immeasurable. It is right and proper to obey God. It is said in Act 5:29, “We ought to obey God rather than men.” We are all familiar with this verse, but when we do things, we always put God to one side, and obey men and listen to their words blindly. Because we have deviated in practicing the truth of obeying God, we cannot gain God’s approval. … We select related Bible verses about obeying God below to help you understand the importance of obeying God rather than men. 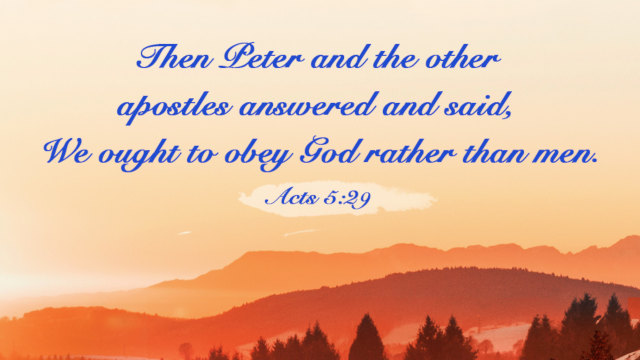 Ephesians 5:21 Submitting yourselves one to another in the fear of God.

1 Samuel 15:22 And Samuel said, Has the LORD as great delight in burnt offerings and sacrifices, as in obeying the voice of the LORD? Behold, to obey is better than sacrifice, and to listen than the fat of rams.

Deuteronomy 13:4 You shall walk after the LORD your God, and fear him, and keep his commandments, and obey his voice, and you shall serve him, and join to him.

Ezekiel 20:19 I am the LORD your God; walk in my statutes, and keep my judgments, and do them;

James 4:7 Submit yourselves therefore to God. Resist the devil, and he will flee from you.

Acts 5:29 Then Peter and the other apostles answered and said, We ought to obey God rather than men.

Genesis 6:22 Thus did Noah; according to all that God commanded him, so did he.

Daniel 7:27 And the kingdom and dominion, and the greatness of the kingdom under the whole heaven, shall be given to the people of the saints of the most High, whose kingdom is an everlasting kingdom, and all dominions shall serve and obey him.

1 Samuel 12:14 If you will fear the LORD, and serve him, and obey his voice, and not rebel against the commandment of the LORD, then shall both you and also the king that reigns over you continue following the LORD your God:

“But the end of all things is at hand: be you therefore sober, and watch to prayer.1 Peter 4:7”

Frequent disasters occur in the last days. How should we watch and wait to welcome the Lord?