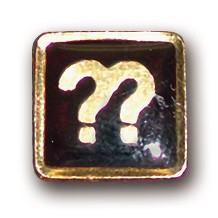 I heard a compelling story from a famous pastor as I drive lots with work so I decided I would share it with others because I had never heard it before- in my own words.

Ray Combs was a famous comedian; however, he was known best for hosting the very popular game show Family Feud ( 1988-1994).  He really liked joking with all the guests.  I personally do not remember him; however, I do remember Richard Dawson flirting with all the women guests.

Anyway, there was a guest on Family Feud who was wearing a brown pin with ?? on it.  When Ray approached the guest, he asked “What do those two ?? stand for?”  The guest smiled and said, “They represent the two most important questions anyone could ever ask you.”  Curious like anyone would be, Ray implied and asked, “I am afraid to ask, but what are they?”

The guest calmly answered, “If you died today, do you know for certain you would be welcomed into heaven?”

Combs laughed it off and turned it into a joke with, “I am not going to answer that on national television.”

Then Combs continued meeting other guests, but quickly returned back to the man with the ?? lapel pin and said, “Ok, you have my interest now.”  Then he added, “Go ahead and tell me what the second ? means.”

Remaining as calm as before, the guest said, “The second question is, ‘If you were to die today and you stood before God and he asked you why He should let you into heaven, what would you say?’”

Arrogantly and trying to be as funny as before, Combs replied “Because I am the host of Family Feud and everybody loves me!”  The audience broke out in laughter and cheers and the game began playing.

A few years later in 1996, Ray Combs committed suicide….did everyone love him like he said on national TV?

For all of us, these are very scary questions because there is absolutely nothing we can do to earn our way into heaven…NOTHING!  It is by God’s amazing grace; however, when we ask him to personally come into our hearts ( to save us), we are guaranteed a reservation in heaven!

Gosh, this is the only thing any one of us should want to be CERTAIN about…a life of eternity with God, not a life – eternal life– full of pain and suffering in a real place- hell.

I don’t know about you, but there is already too much suffering going on all around us.  This is one thing that you have to make a CHOICE about…do you want heaven or do you want hell?  They are real places, my friend, and it isn’t popular talking about them.

Maybe it wasn’t by accident that you came upon this story today.  Maybe this was the story that you needed to hear so, if so, please  don’t turn a deaf ear, but listen.

??.…now that you know what it means, how would you answer the ?? posed to you today…

“Call to me, and I will answer you, and show you great and mighty things, which you do not know”…Jeremiah 33:3

Winning Ways: “Are You Ready?”

Years ago, I was idly channel-surfing and landed briefly on the game show, Family Feud. As host Ray Combs was getting acquainted with his contestants, he pointed to a lapel pin that one man was wearing. He asked, “What do those two question marks stand for?”

I immediately put the clicker down and sat up. I had a lapel pin just like it: a simple brown pin with two gold question marks. I used to wear it to start conversations like the one that had just started on national television.

“Well,” the contestant began, “The lapel pin represents the two most important questions anyone could ever ask you.”

“I’m almost afraid to ask,” Combs joked, “But what are they?”

“The first one is, ‘If you died today, do you know for certain that you would be welcomed into heaven?’”

Combs laughed and said good-naturedly, “I’m not going to answer that on national TV!”

He continued to introduce the other contestants, but then suddenly returned to the man with the pin and said, “Okay, I’ll bite. What’s the second question?”

“The second question is, ‘Suppose you were to die today and stand before God and he asked, ‘Why should I let you into my heaven?’ What would you say?’”

Combs, a stand-up comedian, said, “Because I’m the host of Family Feud and everybody loves me!” The audience laughed, the applause sign came on, and the game began.

I wonder if Ray Combs thought any more about those two questions before his suicide a few years later. They really are two of the most important questions in life, because they center on what it takes to pass our biggest test.

The Bible tells us that one day we will stand before God as our life is reviewed. At that moment, we’ll be glad for a Savior: Jesus has already taken upon himself the punishment we deserved for our sins. We believe in the forgiveness of sins, and so we lift up the poet’s relieved praise (Psalms 130:3-4 CEV):

If you kept record of our sins, no one could last long.
But you forgive us, and so we will worship you.

Join with us this Sunday and let’s celebrate together what God has done for us at the cross! We meet at 9:30am and 10:45am.

(Note: The story of Ray Combs is taken from my book, The Anchor Course: Exploring Christianity Together. If you live in the Austin area, you can check out a copy for free at our church library. I will lead another small-group study of The Anchor Course in September.)