And without controversy great is the mystery of godliness: God was manifested in the flesh, justified in the Spirit, seen by angels, preached among the Gentiles, believed on in the world, received up in glory. (1 Timothy 3:16) 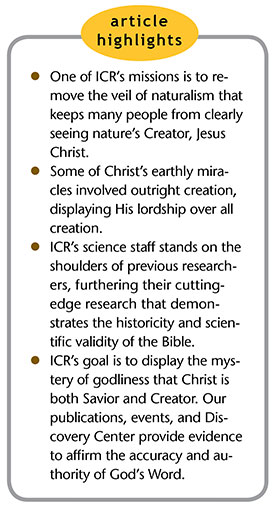 One of the main goals of ICR’s mission is to convey the basic and foundational truth that our God, Redeemer, and King is also the Creator of the universe. Every Christian has the obligation to be a witness for the “glorious gospel” (1 Timothy 1:11), and we ordinarily do so through the focus of the substitutionary sacrifice of our Lord Jesus at Calvary and His resurrection.

But there is a greater mystery to this gospel that is often shrouded in the naturalistic matrix that pervades our educational and media systems. ICR is challenged to peel back the veil of naturalism and reveal the majesty of the Creator, whose Word is affirmed by the evidence of empirical science.

The opening of Paul’s bold statement in 1 Timothy 3:16 uses the unique Greek term homologoumenos, a strong compound passive participle essentially meaning “all speaking the same thing.” Basically, while the “mystery” is definitely “great,” the proof for who Jesus is and His incarnation for the purpose of salvation is widely attested. It is that evidence that ICR is most concerned with in our mission to “speak the same thing” with clarity.

Mysteries of the Kingdom

While subtle evidences of the “godliness” are manifest throughout the ministry of the Lord Jesus, many of them would be seen most clearly by those already called into the Kingdom. Matthew 13 lists several evidences of the work of God on Earth. The parable of the sower and the reception of the gospel are easy to see if one even partially observes how the world reacts to Christianity. The fact that God knew this and openly exposed these things in His teaching should be an evidence of His omniscience.

Likewise the parables of the tares, the mustard seed, the leaven, and the treasures all forecast the nature of the centuries of gospel growth and ultimate harvest of God’s people at the end of the age. None of this would have been possible without the sovereign knowledge of the Creator who “works all things according to the counsel of His will” (Ephesians 1:11).

Tomes have been written in attempts to refute the detailed Old Testament prophecies of the coming Messiah. All have fallen woefully short of their goals, merely demonstrating the impossibility of human foresight and the necessity of divine foreknowledge made available to human agents. The identification of the tribe of Judah and the family of David in the city of Bethlehem—both in widely separated passages—attests to God’s sovereign plan. Daniel’s detailed outline of the “70 weeks” still baffles those who would attempt to naturalize those words.

The odds of such prophetic events being fulfilled in one event are not merely additive but multiplied with each successive announcement. For instance, the identification of the tribe of Judah may have a predictive qualifier of 1 in 12 (the number of tribes), but multiplied by the identification of Bethlehem (of the some 500 or so towns in Israel at that time) it becomes not merely 1 in 512 but 12 times 500—or 1 in 6,000. There are about 300 prophecies fulfilled by the life of Jesus during His time on Earth. The odds of those all coming true in one person are beyond counting!

During His public ministry, Jesus demonstrated His authority and power with miracles that could only be done through the creation of new matter where none existed before. John’s gospel account is built around seven such demonstrations. Jesus once said to those observing these displays of His creation authority and power:

Two examples should suffice. When Jesus turned the water into wine at the marriage feast at Cana (John 2:1-10), He created complex fibers, sugars, acids, bases, and juices with merely the instant thought from His mind. This was enough to stun the governor of the feast (to say nothing of the servants who filled the six water pots with 150 gallons of water). One may reject the evidence, but the feat could be nothing less than the creation of new matter where none existed before.

Likewise, the feeding of the crowd of 5,000 on one occasion (Matthew 14:13-21) and the 4,000 on another occasion (Matthew 15:32-39) involved the instant creation of new bread and fish meat from a small meal that was multiplied into thousands of pounds of food for the huge crowds. The apostles were unable to understand what happened as they collected the baskets of leftovers after all had been fed. Someone may choose to reject the record, but if it actually happened, then it could only be done by the One who brought the universe into existence by His spoken word just four millennia before.

The power of God’s Word is the source of His authority in time and on Earth. Through the Word of God, we are given insight to who the Creator is, the role He has had in history, and the mystery of His being “manifested in flesh.” Therein lies the core of ICR’s mission. We are charged with demonstrating the accuracy, historicity, and scientific validity of that record, providing evidence that may clear away doubt on the part of unbelievers and wavering Christians.

ICR is committed to quality research in the sciences. Some of that work has made it to the public in the form of books, papers, and seminar lectures. But most of the long-term effort is behind the scenes and continues to build upon the work of previous scientists and scholars such as those involved in the Radioisotopes and the Age of the Earth (RATE) project that culminated nearly 15 years ago. Dr. Vernon Cupps’ recent book Rethinking Radiometric Dating: Evidence for a Young Earth from a Nuclear Physicist expands on that work and provides a seminal review of the issues and demonstrates the error of the common “proof” of the deep time so integral to the false story of naturalistic evolution.

Dr. Jake Hebert’s popular booklet The Climate Change Conflict: Keeping Cool over Global Warming is built on his stellar analysis of the errors of the widely accepted Milankovitch theory that has undermined Ice Age studies as well as serious studies of climatology. Dr. Hebert’s research is vital in the demonstration of the bad science that emboldens atheistic thinking.

Dr. Jeffrey Tomkins’ work on the chimp and human genomes has uncovered the fallacy of their supposed genetic similarity and has been responsible for exposing the related errors conveyed in school textbooks. His work has been published in secular journals and continues to make positive inroads within the scientific community.

Evidence of the global Flood during the days of Noah has been a strong emphasis from the days of ICR founder Dr. Henry M. Morris, Dr. Steve Austin, Dr. John Baumgartner, and Dr. Andrew Snelling. Dr. Tim Clarey has added to their work using data from oil drilling cores from all over the world. Dr. Clarey has answered many puzzling questions and demonstrated the assurance that the planet was inundated with a continent-covering flood. His outstanding research (soon to be available in his new In-Depth Science book Carved in Stone) will be the source of much encouragement to Christian geologists and strong evidence of the accuracy of Scripture.

Dr. Brian Thomas is researching original biochemicals in supposedly ancient fossils. These short-lived tissues—many found in dinosaur fossils—contradict the notion that these fossils are millions of years old since such tissues can survive for only thousands of years before decaying. We published his Ph.D. dissertation on this important topic, titled Ancient Fossil Bone Collagen Remnants.

Research Associate and zoologist Frank Sherwin continues to offer his unique insights on God’s intricately designed creatures in his writings and talks in the ICR Discovery Center for Science & Earth History and outside venues, along with ICR’s other scientists.

Additional work is being done by Dr. Randy Guliuzza. His research on natural selection has eviscerated the bold claim that evolution is a fact. Dr. Guliuzza has developed a running commentary and volume of examples demonstrating the built-in DNA design that God placed into the “program” of every replicating organism that enables the organism to sense and adapt to the environmental changes around it.

As one would expect from an omnipotent and omniscient Creator, His living organisms would have the designed ability to live in the changing world—especially since His sovereign attributes can be “clearly seen” in every age and throughout all time (Romans 1:20) until He reduces the universe to a molten mass from which He will make a “new heavens and a new earth” (2 Peter 3:10-13).

ICR has been a quiet voice for the evidence of biblical accuracy for nearly 50 years. The Acts & Facts publication has grown from a small newsletter to a major monthly magazine. It and the Days of Praise quarterly devotional have both been made available without charge to any and all who want them. Those publications are read by nearly 250,000 people, and many more read them through social media. ICR conducts seminars and church training sessions in hundreds of venues each year. Thousands of attendees receive valuable insights and some of the latest work that ICR is developing. These ministries continue unabated.

Of course, the newest member of our family is the ICR Discovery Center for Science & Earth History, which opened in Dallas, Texas, in September 2019. After nearly five years of development with almost $35 million shared and given by the ICR family of supporters, the ICR Discovery Center stands to become a center of training and encouragement for thousands of guests, students, and school groups for years to come. If you have not yet made your plans to visit, please do so.

The Discovery Center is truly unique with its cutting-edge video displays, depth of information available through its many kiosks, and constant emphasis on the scientific evidence that demonstrates the accuracy and authority of the Bible’s message. Our conscious effort is to display the great “mystery of godliness” so that all who look will see the reality of the Creator being “manifest in the flesh” and leave with the certain knowledge that He is returning one day as the rightful King of the universe that He has created.

* Dr. Morris is Chief Executive Officer of the Institute for Creation Research. He holds four earned degrees, including a D.Min. from Luther Rice Seminary and an MBA from Pepperdine University.