“It is with a broken heart that I write this.”

“I never thought that I would be living this nightmare.”

“Since the announcement of Ontario’s passport system I have seen my mental health severely deteriorate, and unfortunately I do not see any end in sight.”

These words are from some of the messages I’ve received from unvaccinated people on how vaccine passports and mandates are affecting them.

Unvaccinated people in Canada are being coerced into choosing between getting vaccinated or getting pushed out of their jobs, colleges, and society. We’re forced to choose between something we don’t need — the COVID vaccine — and something we need: our livelihood.

Why are we being forced to lose our livelihoods over a vaccine that isn’t guaranteed to protect our lives? Vaccine passports do not make us more healthy, they make us more hopeless.

Hopelessness is the prevailing theme in many of the messages I’ve received from unvaccinated people:

“I have been under severe stress since the vaccine ‘passport’ was announced here in Ontario. I’m having difficulty sleeping, and difficulty focusing on work, or anything else.”

“I am submitting the following story on behalf of my 18-year-old cousin…I am heartbroken for him and what these mandates mean to his ability to earn a university degree and earn a living. He is currently unemployed and very discouraged by life.”

“I am having a lot of mental anguish about this passport and if I am forced I will have even more mental stress.”

“I feel constant anxiety about this ever-tightening situation and the situations that are yet to come.”

“Many many more sleepless, anxiety-filled nights to come I am sure…”

“I am depressed and cry every morning thinking about my future being ripped from me…I am so sad.”

“I hope we are able to change the way things are going, I personally am frightened and even more frightened by the people who just shrug and say it’s no big deal.”

Many unvaccinated people have become aware that the significant majority of people who consistently boast about how much they care about people suffering from systemic discrimination and “mental health” issues are simply opportunistic frauds.

I hope the messages I’ve received on the vaccine passport change the Ontario government’s policies. When Ontario’s Advocate for Community Opportunities and I share these messages with policy makers, we’re hopeful it could make them end or at least restrain their oppressive policies.

However, I am not resting my hope on better policies by the government. I am not hoping for better politicians in government. My hope isn’t in people who are more concerned about securing their jobs than securing my rights.

My hope is in God.

If we trust God, then we should be hopeful. However, if we don’t trust God — if we have not believed in Jesus Christ, we are hopeless: we do not have any basis for hope.

Though we’re unrighteous by nature, we Christians have been declared righteous by God through Christ’s life, death, and resurrection — received by faith. Our hope rests in Christ, knowing that just as he ascended to heaven — soon, He’ll descend and return to earth.

Therefore, though some of us have been stripped of our rights over the vaccine — we know our citizenship is in heaven. And we eagerly anticipate the day when Jesus will return as the King of kings and Lord of lords to renew the world and establish justice forever.

That is our hope.

If you’re not a Christian, however, you do not have hope — not real hope. Who can you call at all times when you’re distressed? Who is on your side when you’re afraid? If God isn’t your helper, why shouldn’t you be afraid of what the government can do to you? If you don’t love Christ, how can you look in triumph on those who hate you?

But more than that, if you have not repented and trusted in Jesus Christ — you will suffer the wrath of God in hell forever. So above all, please hope in the gospel. Hope in Jesus Christ.

Christ is the only real hope for unvaccinated and unrighteous people.

That is the hope for unvaccinated people like me. I hope you can say the same.

“What Else Are You Hiding From the Public?” – Pfizer Senior Director of Worldwide Research RUNS From Project Veritas Journalist (VIDEO)

Pfizer senior director of worldwide research ran away from a Project Veritas journalist asking her questions about human fetal cells used in their Covid vaccine program.

Last week Project Veritas released a video featuring a sit-down interview with a Pfizer whistleblower who went on the record with internal emails showing the pharma giant scrambling to hide information about their Covid vaccine.

In the last few weeks Project Veritas has released four under cover videos exposing the truth about Covid vaccines.

TRENDING: NBA Player Got Blood Clots From COVID Vaccine that Ends His Season – NBA Told Him to Keep It Quiet (VIDEO)

Vanessa Gelman bolted as soon as she was confronted with questions.

Nick Karl, a scientist at Pfizer said of pregnant women: “it’s either you get antibodies naturally or vaccinated you pass it through.”

In the last few weeks Project Veritas has released four under cover videos exposing the truth about Covid vaccines. 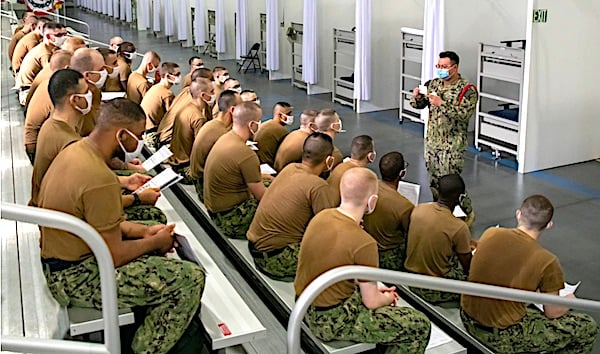 Liberty Counsel on Friday announced a class action lawsuit on behalf of members of all five branches of the U.S. military – the Army, Navy, Air Force, Marines and Coast Guard – against President Joe Biden over his orders they take the experimental COVID shots or face dishonorable discharge.

“The Biden administration has no authority to require the COVID shots for the military or for federal employees or civilian contractors,” explained Mat Staver, Liberty Counsel chairman.

“Nor can the Biden administration pretend that the federal Religious Freedom Restoration Act and the First Amendment do not apply to its unlawful mandates. The commander-in-chief must end this shameful treatment and abuse of our brave military heroes. Forcing the COVID shots without consent or consideration for their sincere religious beliefs is illegal.”

It seeks a temporary restraining order preventing Biden and his appointees from “enforcing, threatening to enforce, attempting to enforce, or otherwise requiring compliance with the Federal COVID-19 Vaccine Mandate…”

Other defendants are Secretary of Defense Lloyd Austin and Secretary of Homeland Security Alejandro Mayorkas.

Liberty Counsel said the non-military plaintiffs include a Department of Defense contractor who has conducted Intelligence, Surveillance, and Reconnaissance quantitative and qualitative assessments and studies, whose assessments are briefed to DOD senior leadership to inform decisions on future employment, allocation, and procurement; a federal civilian engineer employed by a large military defense contractor that provides LCD screens used in United States Armed Forces aircraft; a federal civilian contractor employer whose company develops and supports military weapons systems, including current and next generation land vehicles for the Army and next generation Navy vessels; a federal nuclear contractor employee who is a young woman opposed to abortion and who desires to have children of her own one day; and a Department of Energy Civilian Nuclear Tech who works at the Los Alamos National Laboratory.

The individuals for whom the case was filed are not named, but in a sworn statement on Navy chaplain explained, “I personally observed (and the Sailors told me in the course of counseling about) tremendous amounts of coercion, bullying, censorship, and intimidation being brought forth by the command to bear against the personnel who expressed objections of any kind to the COVID shot mandates, including religious objections…And clearly, the military has lost more lives to the increase in suicide from 2020-2021 (at least 1,012) than to all of COVID in 2 years (~52), but suicide has not been a focus.”

It was Austin who dispatched on August 24 the “Mandatory Coronavirus Disease 2019 Vaccination of Department of Defense Service Members.”

But Matthew Oster, who is on Biden’s COVID task force, admitted the shots are “causing myocarditis” in “young men,” and the Journal of the American Medical Association Cardiology confirmed, “Myocarditis Following Immunization with mRNA COVID-19 Vaccines in Members of the U.S. Military.”

Then on Sept. 9 Biden issued a similar order for federal workers.

The case charges that under the federal Emergency Use Authorization law none of the vaccines has gotten full Food and Drug Administration Approval, so they cannot be mandated.

“Under the above statute, there is no legal basis on which the president may waive the EUA in order to mandate the COVID-19 vaccines for the military. Indeed, he has not done so because he has no statutory authority under the law,” Liberty Counsel explained.

Further, the mandates violate the constitutionally protected right to religion.

“The plaintiffs all hold sincere religious beliefs against the COVID shots on the basis that their body is the temple of the Holy Spirit and to defile it is a sin against God. In addition, the plaintiffs do not want to participate directly or indirectly or otherwise be associated with the destruction of human life through abortion by injecting a product that contains or was tested or developed with aborted fetal cell lines,” Liberty Counsel said.

But the military is telling the plaintiffs “there are NO RELIGIOUS exemptions, and merely submitting such a request will subject them to dishonorable discharge.”

Liberty Counsel said it also is representing clients on behalf of the 3.7 million employees under federal government contracts and two million federal employees who are under the Biden administration’s COVID shot mandate.