CNN sent a camera crew to film a family in Afghanistan selling their 9-year-old daughter to an old pedophile for $2000. The crew not only interviewed the family and knew that they were selling her to buy rice and flour, but they filmed the entire transaction–including the girl being dragged off while resisting and put in a car. The crew that works for a global network worth billions of dollars did not offer to buy the family food so they didn’t have to sell their daughter. They just watched a child being sold into some kind of sex slavery as a “wife.”

The cameras roll as the child applies makeup in preparation for her new “husband.” The father says he has “no choice” but to sell his daughter for food since the Taliban takeover dried up the humanitarian aid he was receiving. The cameras roll as an old man comes to collect his purchase and drags her away as she struggles. No one does anything. The child disappears into the Afghanistan desert as the voiceover says, “The child’s fate has been sealed.”

The full video is even worse. CNN finds other families who are selling their daughters as young as 4 years old; one 10-year-old says she will commit suicide rather than be forcefully wed to an old man. There are two glaring problems here. 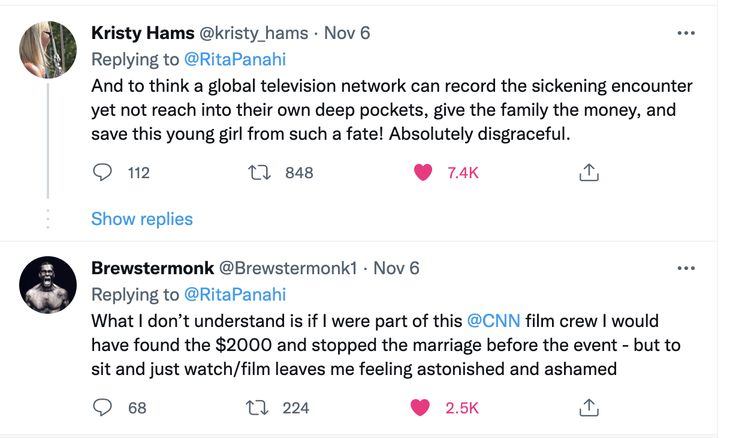 Intervention is not always the best thing to do, and it’s clear that our involvement in Afghanistan didn’t get us much more than a 20-year war and dead Americans. The second our troops were gone, the misogynistic horror show came roaring back at full speed. At some point, we have to recognize that no amount of foreign aid or Western intervention is going to stop the thousands of years of ingrained ways of life in Afghanistan that none of us can understand. Selling children is an unjust and terrible tradition. The fathers are the ones who bear the responsibility for stopping it. But for God’s sake, CNN, couldn’t you have set up a fund for the kids you found and saved a few? Would it have been that hard?

Watch the full video below.

The Biden surrender enabled the sale of this child.