After the models upon which he based his policies proved to be “wildly incorrect,” British Prime Minister Boris Johnson announced Wednesday the lifting of COVID-19 vaccine passports, mask mandates and work-from-home guidance in England.

Regarding masks, the prime minister said the basic policy will be to “trust the judgment of the British people and no longer criminalize anyone who chooses not to wear one.”

“From tomorrow we will no longer require face masks in classrooms, and the Department for Education will shortly remove national guidance on their use in communal areas,” Johnson told the House of Commons.

Sajid Javid told a Downing Street press conference that “we cannot eradicate this virus and its future variants.”

The Telegraph of London reported members of the British Parliament confronted Johnson with the model upon which the lockdown was based, which warned of 4,000 deaths a day.

The most recent complete data from England, Northern Ireland, Scotland and Wales – on Jan. 11 – showed a seven-day average of 232 deaths a day attributed to COVID-19.

In the U.S., with the more contagious yet much milder omicron variant now about 99% of new cases, nearly every state last week was recording a doubling of cases from week to week. But seven states, as of Wednesday morning, are recording declining cases.

Conservative MP Steve Baker, deputy chairman of the COVID recovery group, said the “reality is the Prime Minister was shown a terrifying model which was subsequently proven to be widely incorrect but he took away freedoms from tens of millions on that basis.”

“It is monstrous that millions of people were locked down, effectively under house arrest, their businesses destroyed, their children prevented from getting an education,” the Parliament member said.

“The situation is now perfectly plain that even our most basic liberties can be taken away by the stroke of a pen, if a minister has been shown sufficiently persuasive modeling that tells them there is trouble ahead.”

Baker said he told Johnson to challenge the modeling by Cambridge University and Public Health England. Prof. Tim Spector of King’s College London and Prof. Carl Heneghan of Oxford University were called into Downing Street to go over the data, the Telegraph reported.

“But by the time the models were shown to be inaccurate, it was too late to stop public calls for restrictions,” the British broadsheet said. 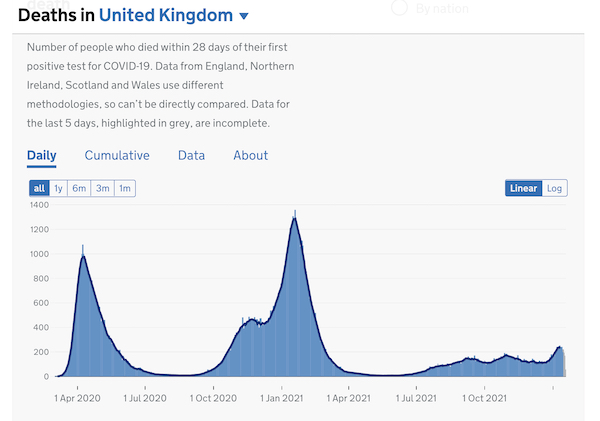 Official U.K. data on deaths within 28 days of a positive COVID-19 test (https://coronavirus.data.gov.uk/details/deaths)

In a separate story, the Telegraph recalled that in the early stages of the pandemic, the British government’s coronavirus strategy was to “flatten the peak” of cases.

However, the government made an about face when Imperial College of London published its Report 9 in March 2020 projecting 500,000 deaths in the United Kingdom if politicians took no action.

But the hard data and studies from around the world show the lockdowns and other severe mitigation measures didn’t stop the typical waxing and waning of a respiratory virus pandemic. And the Telegraph spoke with an expert on infectious disease modeling at Bristol University in England who made the point that even if “the government didn’t put in restrictions, people would have started behaving differently.”

“But we ended up with the baseline being ‘assuming nothing changes,’ because it’s difficult to know what the alternative baseline is,” said Dr. Ellen Brooks-Pollock.

The London paper cited a well-known aphorism among scientists, coined by the British statistician George Box in 1976.

Czech Prime Minister Ends Vaccine Mandates: ‘We Do Not Want to Deepen the Rifts in Society’

The Czech government is ending COVID vaccine mandates to avoid ‘deepening fissures’ in society. The news was delivered by Prime Minister Petr Fiala at a press conference on Wednesday.

“This does not change our stance on vaccination. It is still undoubtedly the best way to fight COVID-19 … however, we do not want to deepen fissures in society,” Fiala said.

Massive protests rocked the previous government, which ordered COVID-19 vaccinations for hospital and nursing home staff, police, soldiers and some other professions, any anyone over age 60.

“Fiala’s government has also shortened quarantine and isolation times, while launching mandatory testing of employees at companies from this week,” the report noted. “Hospitalisations, which peaked in the latest Delta wave at more than 7,000 in early December, dropped to 1,635 on Tuesday from 1,761 reported for Monday.”

The Czech Republic’s actions do not mean that the restrictions are ended, however. An amendment to the nation’s coronavirus measures from the previous government of the ANO party and the Social Democrats extended the period for which the legislation is active up to August 2023. These additions will permit the government to enact quarantine and isolation measures, or limit dance club attendance.

Furthermore, Health Minister Vlastimil Válek announced that there may be more coronavirus measures, such as allowing booster doses for children over the age of 12.Advertisements

On Wednesday, beleaguered prime minister Boris Johnson stunned his Western counterparts when he announced vaccine mandates and work restrictions would soon be lifted — in March at the latest.

“People in England will no longer be required to wear face masks anywhere or work from home from next week, Prime Minister Boris Johnson said on Wednesday, adding that scientists believed a wave of the Omicron coronavirus variant had peaked nationally,” Reuters reported.

Also on the chopping block: Self-isolation or “quarantines,” which will expire in March, but the measures might be axed sooner.

“Because of the extraordinary booster campaign, together with the way the public have responded to the Plan B measures, we can return to Plan A in England and allow Plan B regulations to expire as a result from the start of Thursday next week,” Johnson told the British parliament.

“Johnson said mandatory COVID-19 certification would end, though businesses could choose to continue COVID passes if they wanted to,” Reuters added.

Boris Johnson’s current assessment is that the nation’s plummeting Omicron infection numbers and stabilizing hospital rates indicate that the UK can “safely live with Covid.”

It appears that more nations are following suit and deciding that Covid does not mean the end of Western Civilization as we know it.

In his latest press conference, NBA star Kyrie Irving is hounded by the media again about not being jabbed, he calmly explains his free choice decision and they still go on!

Mainstream media are the enemy of the people.

Europeans are protesting the vaccine mandates which are on the road to a social credit system like China.  Legal analyst Eva Vlaadingerbroek was on Tucker Carlson last night to discuss.

There is a massive movement going on in Europe right now of tons of people, hundreds of thousands, millions actually who are very much aware of what’s at stake here.  These people are aware of the fact that our constitutional rights are being set aside without an end date and that we’re heading towards a new system, a tyrannical regime of mass surveillance and control.  And this is not just a hunch.  This is all part of a bigger plan.  This is something people watching right now can go and look up.

What’s very important for the American audience to know is that we’ve had this digital COVID pass in place in Europe, which is basically like a QR Code on your phone that grants you access to everyday life, like to bars, restaurants, etc.  It’s completely [attached] to your vax status and this is all part of a European project issued by the European Commission that is basically surrounded around a European digital identity.  So this will not stay just linked to your vaccination status. This will encompass taxes.  This will encompass your medical records, apart from your vaccination status, your bank information.

So basically we already have a system in place now that’s very close, or at least from my interpretation, the beginning phases of a social credit system.  We are literally turning into China.

See the video at the link below: