As the Founding Fathers retired and grew old in the nation they had worked so hard to create, many people wrote to them from all over the world for a wide variety of reasons. In fact, it is estimated that Thomas Jefferson wrote at least 19,000 letters throughout the course of his life—and that’s a conservative estimate, in all likelihood he wrote a vast number more that have not survived.[i]

Several times in his later years, Jefferson received letters from parents who named their children after the aged president. The mothers would ask Jefferson to leave some kind advice to the newborn child for them to read whenever they got old enough.

One such parent was Sarah Grotjan, the daughter of an officer from the War for Independence, who wrote to Jefferson on January 1, 1824. She explained to the old president that he is the namesake and designated godfather for her son, and then requested that he leave the child his words and guidance. Grotjan expressed that:

This testimony of one of the fathers of our blessed country, will be to me the most invaluable bequest; and should, which God grant, my son grow up to manhood, and inherit the spirit of his father & mother, it will be to him a talisman, calculated to operate on him through the course of his life. It will stimulate him to imitate the virtues of those heroes and sages, whom it was not his fate to know, but to whom he will feel himself drawn as by consanguinity [blood relation], being in possession of the only posthumous testimony in the power of mortals to give.[ii]

Your affectionate mother requests that I would address to you, as a namesake, something which might have a favorable influence on the course of life you have to run. Few words are necessary, with good dispositions on your part. Adore God; reverence and cherish your parents; love your neighbor as yourself, and your country more than life. Be just; be true; murmur not at the ways of Providence—and the life into which you have entered will be one of eternal and ineffable bliss. And if to the dead it is permitted to care for the things of this world, every action of your life will be under my regard. Farewell.[iii] 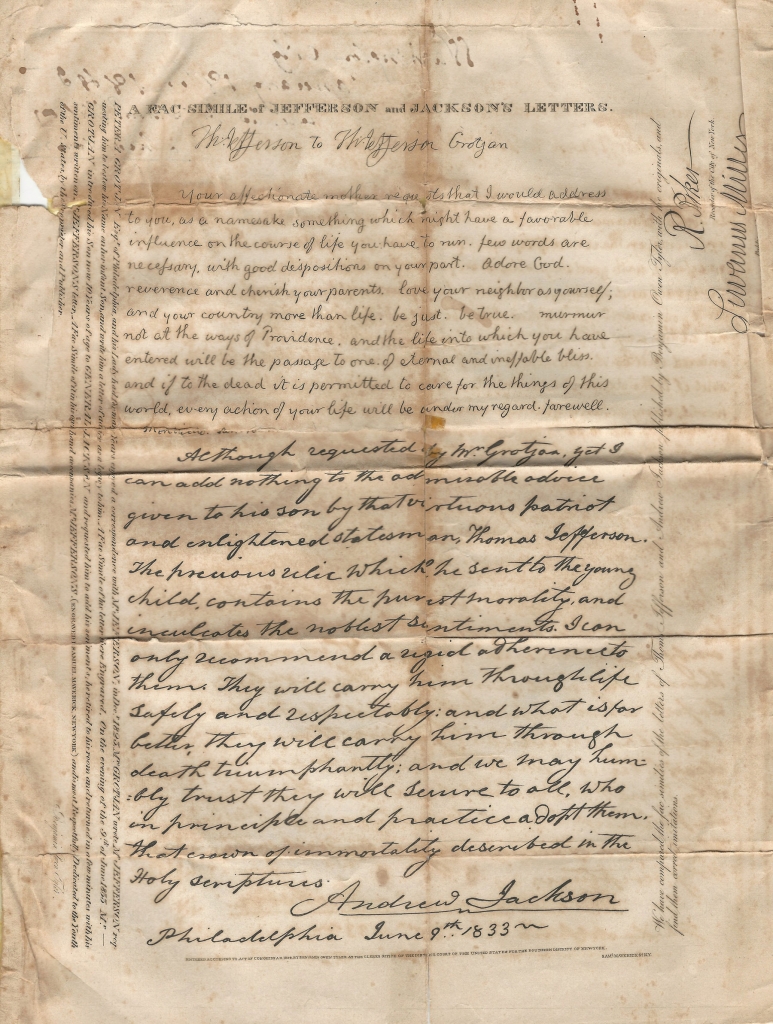 Jefferson highlights the eternal principles which resonate throughout the Bible. He summarizes and recalls several of Jesus’s most poignant teachings. Jefferson points quite plainly to Matthew 15:4, where Jesus recites the commandment to, “honor thy father and mother.” Additionally, Jefferson quotes Mark 12:31 where Jesus orders His follows that, “thou shalt love thy neighbor as thyself.”

Jefferson’s words offer timeless advice which one would do well to follow today. By pointing the child to follow God, Jefferson gives him the best advice known to man.

Something which makes Jefferson’s letter to his namesake even more historically significant is that several years after the Grotjen’s received it Andrew Jackson passed through town while he was president. The family presented Thomas Jefferson’s letter to Jackson and asked him to add any advice of his own. The new president, after reading what his predecessor wrote, added below:

I can add nothing to the admirable advice given to his son by that virtuous patriot and enlightened statesman, Thomas Jefferson. The precious relic which he sent to the young child, contains the purest morality, and inculcates the noblest sentiments. I can only recommend a rigid adherence to them. They will carry him through life safely and respectably: and what is far better, they will carry him through death triumphantly; and we may humbly trust they will secure to all, who in principle and practice adopt them, that crown of immortality described in the Holy scriptures.[iv]

To have two presidents both taking the time to write to a small child and then to both express a total reliance on God seems to have resonated powerfully with the family and their community. Shortly thereafter facsimile copies were made and distributed with some explanatory information in the margins so that people could read and share the same principles with their own children and families.