Heroes come in all shapes and sizes, and from all walks of life. Some seem destined for greatness, or at least something special, early on. Some appear to carry Lady Luck on their shoulders. And yet, for the most part, the majority of heroes have less than stellar beginnings, are saddled with nightmarish memories of the traumatic situations they survived (if they survived), and are extremely uncomfortable with the title hero.

Johnathan Courtney, the focus of this piece, fits the latter category. Though he received multiple citations for meritorious service (including two bronze stars) it is not just the singled-out actions that make him a hero in my view. It is the cumulative actions over a drawn-out period in harm’s way, along with shouldering leadership responsibilities in equally trying situations that merit the often difficult to bear title. Such duties, in John’s case, include a tour in Iraq. Part of the time as a platoon leader leading hundreds of successful combat patrols, part of the time as the company XO, and winding up as Battle Captain.

By the completion of his tour John would be forever changed by his experiences. Due to his upbringing, his character, and the fact that he’s an alpha male in leadership positions he possessed an inflated sense of responsibility for the soldiers under him. The death of eight soldiers—seven directly and one by way of an investigation—would haunt John because of his sense of responsibility and the decisions he made regarding each. Decisions he never could have imagined during his early years.

John’s mother, Ellen, is Caucasian, and his father, Don, is Native American. He predominantly identifies as Native American, from the Wasco and Warm Springs tribes, having been raised on or near the Warm Springs reservation in Central Oregon throughout his childhood. Along with returning to Central Oregon to reside in Madras several years after his military hitch and the divorce of his first marriage.

John, for the most part, was an average student. Education didn’t hold much importance to him during his early childhood. The divorce of his parents and subsequent move off the reservation to the nearby town of Madras played a part in that. So did the cultural change in peer groups. And, eventually, the return of his father (parents remarried) after being gone several years created additional issues.

During the various life changes John struggled with anger and identity issues: his purpose in life, his place in the family, in society, etc. It seemed to escalate during his high school years. He began drinking as a sophomore. However, he also joined the R.O.T.C. during this period, which became a positive influence. After meeting Sgt. Randy Casey—a tough as nails Ranger that became his mentor—John felt a sense of purpose.

Similarly, John was torn with wanting to be like his dad—who, in his eyes, accomplished everything he set out to do—and sought his approval, but he equally struggled with anger issues against him over the divorce, remarriage, and other family situations. 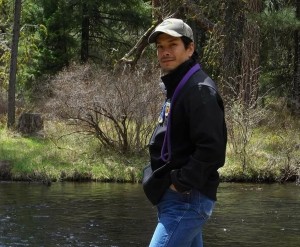 The new sense of purpose seemed to drive John. While he still appeared to vacillate in some areas, like changing his college major five times—eventually earning a BS in Sociology—he tackled everything that came his way in the R.O.T.C.: scoring in the top 5% of the country.

Choosing a career in the military, John (now a Lieutenant) was stationed at Ft. Benning, GA, where he had previously attended Airborne training. It took two attempts to get through the elite Ranger training, having been held back on his first attempt due to a medical issue. But he had the drive and character to claw his way back and earn the right to wear the much-coveted patch.

John also received mechanized training, which prepared him for his next post at Ft. Carson, CO, where his initial job was the Asst. Battalion Maintenance Officer of the 112th Infantry Regiment.

Soon after his arrival John’s group went through a transition period. The 112th was phased out as it became part of a Combined Arms Battalion, a new self-sustained format. With John becoming the Platoon Leader of 3rd Platoon, “B” company (Bravo / Blackhawk) of the 168th Armor Battalion. 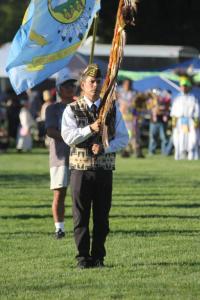 Following a lot of preparation, including war games at Ft. Irwin, CA, the 168th took its turn in Operation Iraqi Freedom. John deployed to Iraq in November, 2005. By mid-2006, his platoon had been on over 500 combat patrols without a single casualty among his men. An impressive string of skill and luck. Unfortunately, for John, it would not continue.

John, who had been handpicked by his Company Commander, Capt. Larry Sharp, to be the company XO (second-in-charge), was promoted to Captain and took over the Battle Captain position in July, 2006. A position which gave him responsibility for a vast area, including everything that took place outside the compound.

The first half of John’s tour, prior to his promotion to Captain, is viewed differently by him than the last half. During the interview he spoke of both positive and negative aspects of the deployment during the period covering the first half of his tour. But it became quite clear that his focus regarding the last half of the tour centered squarely on the negatives. In his own words, this period is when he “started getting lost in the head.”

Early on, John talked about the hundreds of successful patrols, about a time when he earned one of his Bronze Stars (with valor) “for going the wrong way,” how their company saved the town from being overrun, and how they took out the enemy’s second-in-command. Although, scattered within those tales were less positive but equally memorable tales of a grandfather and his grandson being killed, a young boy that smiled and waved to the GIs entering and exiting the compound daily found hung on the fence after being tortured to death for being friendly toward the Americans, and a rear echelon soldier being negligently killed by civilian contractors—the first GI death that John had to deal with personally as the investigating officer.

A subtle, but very noticeable change came over John when he began to speak of the last half of his tour. The period when 7 soldiers under his command were killed. The decisions and responsibility lay with John as the Battle Captain. And it is clear that he internalized each event and it festered like a cancer.

John returned home in November, 2006. Within a few months he was drinking to numb himself. After all, he’s an alpha male, an elite soldier, a Ranger, and an officer. Showing weakness is forbidden. An unwritten code—but a code nevertheless.

John’s life began to slowly implode. Over the next several years he lost his career, his marriage (and custody of his daughter, Kirsten), had difficulty getting and/or keeping jobs, increased his drinking continually, and eventually had to move from Colorado back home to Madras, OR. And when he did make the effort to get help—filing twice with the VA regarding PTSD, and trying to get help through the community services on the reservation—he was either ignored or given excuses why they couldn’t help him.

The only good thing that occurred during this period was his marriage to his second wife, Emily. But his situation began to put a strain on that marriage, as well. To the point that Emily finally gave John an ultimatum. That ultimatum was the catalyst that created an eruption. The eruption ended with John barricaded inside his home surrounded by armed tribal police. And John, who had suicidal tendencies from the PTSD and had previously attempted suicide, continued to drink. Which made some wonder if he was now trying to commit suicide-by-cop.

It is said that it is always darkest before dawn. It is also said that God works in mysterious ways.

The tribal police threw the book at John. He was charged federally with the felonies, and he was looking at a long prison term if found guilty and given the maximum sentencing. Luckily, a lot of things began to mysteriously fall into place for John. The right people were coming into his life at the perfect time and he was starting to get the help he should have been given years earlier. The judge also took notice of how quickly John was turning his life around with the help. Thus, eventually, John took a plea deal that kept him out of prison, but put him on probation for 5 years.

Unfortunately, the felony conviction caused John to be terminated from the good job he had acquired while waiting for his court date. And yet, like every other good thing that had been occurring during this period, a woman John didn’t know called and offered him a job. A job he is still successfully performing two years after being hired. He is the Strategic Prevention Framework Partnerships for Success Coordinator for Best Care (Whew! That’s a tongue twister. Who makes up these titles?) But seriously, he deals with programs set up for adults, youth, and veterans. And his very painful past is no longer a hindrance, it’s an asset when dealing with people having similar issues.

John’s faith was shaken to the core through the awful period in Iraq and subsequent years of anger and alcohol abuse. However, through hindsight, he clearly sees God’s imprint during the situation. And, like other vets he’s been in support groups with, John has returned to his faith. He is the first to say that he is still working on his spiritual life and walk, but he’s putting the same effort to move forward in that area as he has in all other areas of his life. Similar to his time in the R.O.T.C. and the military, John has excelled in everything he’s done after getting a little help to get back on the right course. And he has already touched many lives with his story and his concerted efforts to help people on a daily basis through his job, as well as through his efforts with the VFW. 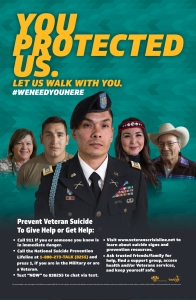 Like most true heroes, John is extremely uncomfortable with the hero title. He simply did his job to the best of his ability and took his responsibility for the men under his command seriously—so seriously that each death of a soldier through his decisions slowly ate him up inside. Because he cared too much, which always compounds the pain in war. Yet, the same character traits that made him a hero then make him a hero now to all those he goes above and beyond to help on a daily basis.

John likes the old hymn Amazing Grace, and the opening lines say it all: Amazing grace how sweet the sound that saved a wretch like me. I once was lost but now am found, was blind but now I see.

I, personally, thank John for his service to the country and to his continued service to the community that he resides in. It is truly an honor to know him, and to call him…a brother in arms…and a friend.