The prolific author and pastor taught Christians how to “Be” in the Word. 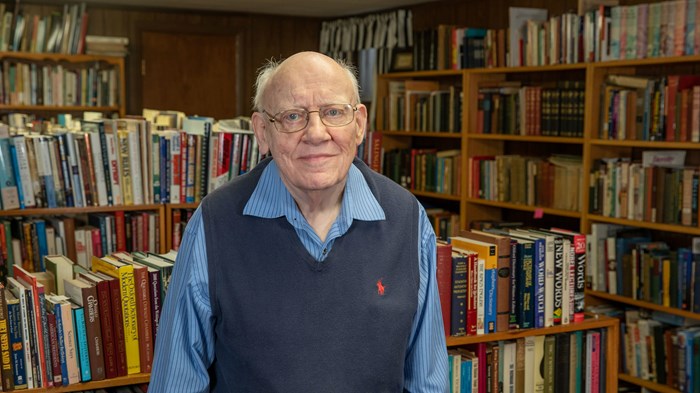 Bible teacher, pastor, and preacher Warren Wiersbe died Thursday at age 89, leaving an impressive legacy of teaching, preaching, and mentoring countless pastors. Through his lessons, broadcasted sermons, and over 150 books, he resourced the church to better read and explain the Bible.

In a tribute, grandson Dan Jacobsen recalled how pastors often tell him, “There’s not a passage in the Bible I haven’t first looked up what Wiersbe has said on the topic.”

Wiersbe described himself as a bridge builder, spanning the gap “from the world of the Bible to the world of today so that we could get to the other side of glory in Jesus,” according to Jacobsen.

Of all his many writings his “Be” commentary series is his most well known and well loved, including books like Be Loyal (Matthew), Be Diligent (Mark), Be Compassionate (Luke 1–13), Be Courageous (Luke 14–24), Be Alive (John 1–12), and Be Transformed (John 13–21). Wiersbe sawhis love of expounding the Scriptures as a gift that God had given him for the sake of others:

Writing to me is a ministry. I’m not an athlete, I’m not a mechanic. I can’t do so many of the things that successful men can do. But I can read and study and think and teach. This is a beautiful, wonderful gift from God. All I’m doing is using what He’s given to me to teach people, and to give glory to the Lord Jesus Christ.

His wisdom and teaching has left an indelible mark on countless pastors and Christian leaders.

Jerry Vines, Baptist minister and two-time past president of the Southern Baptist Convention, remarked on Twitter that “so many things I did were birthed by Warren Wiersbe.” Remembering his “great mentor and friend,” Vines said Wiersbe “is the man who taught me how to expound the Word of God.”

Daniel Darling, vice president for communications at the Ethics and Religious Liberty Commission, also spoke of Wiersbe’s influence: “Wiersbe had a formative influence on me as a writer and pastor. A long full life of service to the church.”

“Giving thanks for the life of one of the great preachers of our century, Warren Wiersbe,” tweeted Barry McCarty, professor of preaching and rhetoric at Southwestern Baptist Theological Seminary. “So many close friends who have influenced me deeply were mentored by Wiersbe. We owe him much.”

In addition to a prolific writing career, Wiersbe—who came to faith after hearing Billy Graham preach at an early Youth for Christ rally—was also involved in parachurch and pastoral ministry for much of his life.

Wiersbe served as director of Youth for Christ’s literature division and editor of Campus Life magazine, in addition to his work with groups such as the Slavic Gospel Association, Child Evangelism Fellowship, National Religious Broadcasters, Christian Booksellers Association, and Back to the Bible.

He received ordination from Northern Baptist Theological Seminary in Lombard, Illinois, in 1951 and held pastorships at Central Baptist Church in East Chicago, Indiana (1951–1957), Calvary Baptist Church in Covington, Kentucky (1961–1971), where his Sunday sermons were broadcast over the radio as the “Calvary Hour,” and the historic Moody Memorial Church in Chicago, IL (1971–1980), where his sermons were broadcast on Moody Radio as part of Moody’s “Songs of the Night” national radio program.

While at Moody Memorial, Wiersbe was a regular contributor for Moody Monthly, writing the “Insight for the Pastor” column giving practical ministry advice as well as brief biographies of famous individuals from church history. He also taught classes at Trinity Evangelical Divinity School during his time in Chicago and developed curriculum for a DMin preaching course titled “Imagination and the Quest for Biblical Preaching.”

Another important aspect of his time in Chicago was mentoring young pastors, among them an up and coming preacher named Erwin Lutzer, who would succeed Wiersbe as the senior pastor at Moody Memorial after Wiersbe left in 1980. In a tribute to his mentor, Lutzer recalls that Wiersbe was always gracious with his time and cared deeply for the ministries of the pastors he was mentoring and the city where God had placed him:

He always had time for us; he always made us feel as if we were the important ones in the room; it was never about him but always about us. How I still remember him closing his books on his desk when we entered, sitting back, welcoming us, eager to discuss how our ministries were doing. We talked about the challenges of the city, the challenges of shepherding people, and the pressures of time for sermon preparation, etc. Then we would find some hidden room in the church and intercede for the needs of the city and the great need for a revival such as was experienced during the ministry of D.L. Moody.

In 1980, Wiersbe and his wife Betty and their family moved to Lincoln, Nebraska, where Wiersbe took a teaching post at Back to the Bible Radio Ministries and from 1984 to 1990, he served as General Director of Back to the Bible. During this time, Wiersbe also wrote regularly for CT and its sister publication Leadership Journal (read an excerpt here).

Wiersbe amassed a prodigious library during his lifetime, so much so that when they were house-hunting in Lincoln in 1980, ahead of their move to Back to the Bible, Betty told the realtor, “We are looking for a library with a house attached.” Wiersbe chose to leave his collection of around 14,000 books to Cedarville University as a part of the Warren and Betty Wiersbe Library and Reading Room.

Wiersbe became writer in residence at Cornerstone University in Grand Rapids, Michigan, in 1995, where he also was appointed Distinguished Professor of Preaching at Grand Rapids Theological Seminary.

Author and pastor Michael Catt said of his friend via Twitter: “My heart breaks but heaven rejoices in the homecoming of this great man of God.”