The grace period is over for false and carnal preachers because there is too much at stake. It’s over, because protecting you from shame is not nearly as important as saving a nation from destruction.

The Left has declared total war on decency, and you are in God’s line of fire.

Ask yourself. Why were Ananias and Sapphira struck dead at the feet of Peter in Acts chapter 5? It was not just for what they did, it was also because of when they did it. They did it at an explosive moment for the church. Satan was going about like a roaring lion, trying to destroy the church, and God was doing extraordinary miracles by the hands of the Apostles. Ananias and Sapphira chose to lie to the Holy Spirit at a strategic time when the church needed to be reminded that they served a holy God.

You will either be purified or replaced.  The time when God winked at your compromise is over.  You thought God didn’t see. “And they say, “How does God know? And is there knowledge in the Most High?””  (Psalm 73:11).

Worse yet, you thought because He has delayed your discipline, He has somehow given you license to continue in your lifestyle of drunkenness and materialism.

Public confession of sin is coming.  Malachi 3:3 says, “He will sit as a refiner and a purifier of silver; He will purify the sons of Levi, and purge them as gold and silver, that they may offer to the Lord an offering in righteousness.” Remember—not everyone who is disciplined by God will make the cut.

Look for tragic downfalls—you who have fattened yourselves at the expense of the sheep and left them weak and unprotected.  (see Ezekiel 34) God told you to resist the wicked winds of political change.  Instead, you hid behind a lame excuse that you didn’t want to be political.

The wicked devices of the Left that have wrecked marriage, and continue to kill the unborn, are but a few of the evils it was your duty to oppose.  Instead, you self-righteously said you were above politics.

Meanwhile, those political policies have oppressed the sheep of God. Godless laws got them fired for being Christian.  You said nothing. Political correctness got their children suspended from school. You looked the other way.   Godless laws bankrupted bakers, florists, and other Christian small businesses.  And still, you were silent.

In your silence, you are taking other people down with you.   You are damaging your audience by only saying what they want to hear. You have not led them forward; you have not removed them from danger.  Worse yet, when you finally speak out, it is misguided.

You were silent when Obama worked his destruction.  But now you oppose a President who is doing more for the sheep of God than you are.  Man of God: Tell the truth.

I was awakened out of a dead sleep, and God said, “It is time to fulfill My promise.” Then He showed me Jeremiah 3:15, “And I will give you shepherds according to My heart, who will feed you with knowledge and understanding.”

Satan is not impressed with your billion-dollar empire. He mocks it.  It has no power where it matters.  R. A. Torrey said, “The Devil is perfectly willing that the church should multiply its organizations and its deftly contrived machinery for the conquest of the world for Christ, if it will only give up praying…The Devil is not afraid of machinery; he is only afraid of God. And machinery without prayer is machinery without God.” 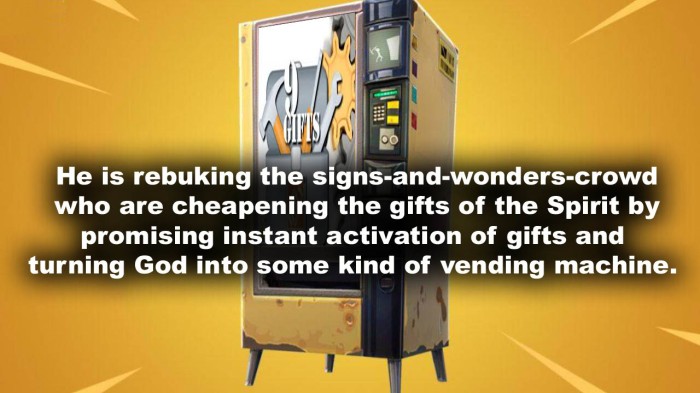 Then God told me how He has come to despise the word, ‘Activate.’  He is rebuking the signs-and- wonders-crowd who are cheapening the gifts of the Spirit by promising instant activation of gifts and  turning God into some kind of vending machine.  God is opposed to the message that promises gifts without a relationship to the Heart of the Father.  God will only grant gifts to those who surrender to intimacy with Christ.  It is not an overnight deal—it is a grueling journey, it is the furnace of affliction, and a season of preparation.

‘Instant-ism’ is bringing the prophetic movement down.  Repent or you will soon find your movement in the museum of failed revivals.  The enterprise of doling out daily words of prophecy grieves God.  He deems it to be the same as horoscope reading.  Worst of all, it has driven the sheep away from the Bible.  All of this prophesying has failed to lead to a spiritual awakening in America.

Consider:  “I have not sent these prophets, yet they ran. I have not spoken to them, yet they prophesied.  But if they had stood in My counsel, and had caused My people to hear My words, then they would have turned them from their evil way and from the evil of their doings.” (Jeremiah 23: 21,22)

We are on the cusp of a golden era of soul winning.  God sees the harvest is ripe.  Beware of the anger of God most when He sees the lost searching for Him.  That is when He cleans house. That is when He says, “I am going to save the lost—either let me purify you for service, or get out of My way.”

It is a fearful thing to fall into the hands of an angry God. (Hebrews 10:31)

Natural selection has long been used as a weapon by evolutionists. They wield it like a sword in their war against Scripture, slicing their way through real science in an effort to promote their naturalistic agenda.

These three assumptions then lead to the concept that one group of organisms (genotype) is more adapted to its environment and thus possesses greater fitness for surviving and reproducing. The conclusion is that certain genotypes with greater fitness will leave on the average, more offspring than do less fit genotypes. This conclusion is most often defined as natural selection.

Evolutionists go onto to say that because of natural selection, those genetic traits that promote a greater level of fitness will become more prevalent in the next generation. The increase in the frequency of these traits increases throughout the population and will eventually lead to gradual change in the entire population.

One of those hurdles involves the ability to measure the biological complexity of fitness as described above. The only real way to test it would be to study the different isolated components of fitness. However, when these different components are separated or pooled together, they may alter the effects of a different component, making any test results questionable at best.

A second problem is the genetic complexity of fitness. The fitness aspect being examined may involve anywhere from one to many different genes. Identification of each and every gene along with its affect on other associated genes can require years of intense research. And this research can be easily contaminated by inadvertent environmental factors without the researcher realizing it.

Probably the largest hurdle to overcome in determining fitness is statistical.  Selection of coefficients as small as 1% or ever smaller, can have a major impact on gene expression of any single gene, group of genes or all of the genes involved with the specific fitness trait being studied.

All this is to say that although you hear evolutionists using natural selection all the time, it is extremely difficult for them to accurately quantify their use of the term. Hence, it has become a catchall expression used to explain any change in a population or species of plant or animal.

For example, the genetic variability within a large population will generally remain fairly stable. For the sake of the example, this large population has 1000 genes that are heterozygous (Aa, Bb, Cc, etc.) and 9000 genes that are homozygous, (XX, xx, YY, yy, ZZ, zz, etc). The only genetic variation exists in the 1000 heterozygous genes.  The homozygous genes are fixed and are not variable. As the numerous individuals within that population continue to interbreed, the various genetic traits found in the 1000 heterozygous genes will be equally shared and dispersed throughout the population, thus preserving the overall genetic and physical make up of that population.

With each new population that breaks off from the parent population, it continues to reduce the amount of genetic variability in the new populations. The more variability a population loses, the less likely they are to survive any changes to their environment. Eventually, a population may lose so much of their variability that their chances of surviving any type of environmental change are extremely poor, increasing the likelihood of their eventual extinction.

Or perhaps a major climate change occurs in the area of the parent population.  Only those individuals that possess the traits necessary to survive the changes will survive. The forces of natural selection will select for those individuals best suited to survive in the new climate, while those that are less fit will die off. This can also reduce the amount of variability within the parent population. The same thing can happen with a disease or parasitic infection that affects a significant part of the population.

As stated before, natural selection either helps to keep a population stable, which means no change, or it will drive it to form a new species with a lesser amount of genetic variability and eventually to possible extinction.

When you think about it, natural selection could be considered an integral part of the second law of thermodynamics, in which everything if left to itself will eventually break down and decay over time.

Now the question that has to be asked is:

“How does natural selection support evolution which requires an ever-increasing amount of genetic information or variability?”

From a creationist point of view, God created everything to be very good.  Undoubtedly, He would have placed a large amount of variation within the genetics of all or most of the plants and animals that He created. Then at the time of Flood, Noah (with God’s direction) would have most likely selected those animals with a greater amount of variation. We know this was so because of the tremendous number of different animals found in Post Flood deposits.

After the Flood and the animals dispersed off the Ark, the pressures of natural selection would have been very minimal, allowing rapid reproduction of most animals. As they rapidly reproduced, they would have started splitting off into different populations and moving into different regions of the world. The result would have been rapid loss of genetic variation resulting in rapid speciation. Eventually, the regions started to fill will animals and as it did, the pressures of natural selection would have increased in such a way to slow down reproduction and speciation. Many of the species created rapidly after the Flood became extinct because they most likely did not possess the genetic traits that allowed them to survive in their new climates and environments.

If evolutionists truly understood the effects of natural selection, they wouldn’t wield it like a mighty sword, for they will soon find that they will be the ones getting stabbed. However, creationists should wield the sword of natural selection because it truly does cut to the heart of the Godless evolutionary model.