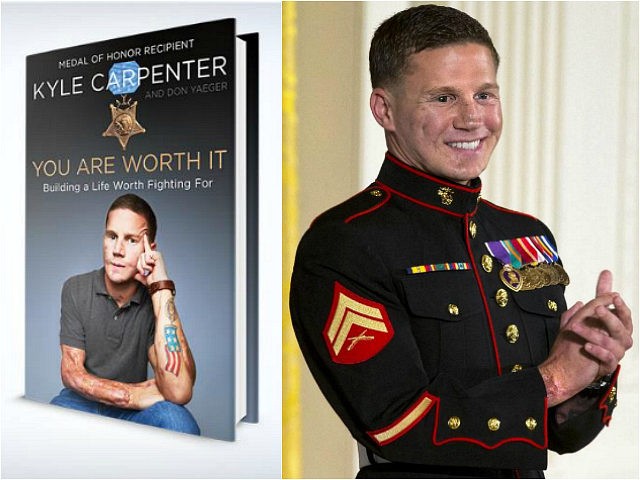 Carpenter reflected on the genesis of his forthcoming book You Are Worth It: Building a Life Worth Fighting For, scheduled for release on Wednesday.

“This book started many, many years before I started writing it two years ago,” Carpenter said. “I was injured by an enemy hand grenade in Afghanistan in 2010. I spent three years recovering at Walter Reed National Military Medical Center. … And through that three years, I was forced to search for the silver linings during the long dark and painful nights and days in the hospital.”

Carpenter sought to write a book with broad appeal and expansive applicability.

“After leaving my three years at Walter Reed — and just having an amazing recovery thanks to the incredible staff there, my family, and so many loving and supporting people around the country — I immediately drove out of the gate of Walter Reed, and I drove down to Columbia, South Carolina, and moved into my small one-bedroom apartment there to start my freshman year at college,” recalled Carpenter. “I graduated from college December of 2017 and looking ahead and thinking about potentially starting a book, I just kept getting hung up before even starting because I didn’t want to write a book that only people that have served in the military or that have been to combat could understand. I wanted a book that transcended all boundaries and that anyone could pick up and not only understand but take lessons from.”

The centrality and universality of struggle to the human condition formed the perspective of his book, revealed Carpenter.

“All of these experiences over the years leading up to this book, at the time, they were just that — they were experiences, something that happened,” Carpenter remarked. “There was always the next therapy appointment, next surgery, next college exam, but with time and deep thought, those evolved into life lessons, which then evolved into perspective. And I think we can never have enough perspective. And so, I wrote this book from the angle of struggle because going through these events and these meet and greets, as I was thinking about how I wanted to write this book, people would always come up to me after these events and say, ‘Oh, well, I was never in the military, but,’ and then proceed to tell me their own version of struggle. So that was kind of a light bulb moment for me, like, ‘Oh, of course, I can write about struggle,’ because everyone — physically, mentally, or emotionally — can relate to struggle.”

Carpenter determined, “Struggle is that one common fiber throughout every single person on this Earth, and so, yes, [my book] has a chapter or two about Afghanistan and my injury to give context to my journey, but it’s so much more that. It’s primarily written from the blast on because, like I said, I wanted people to [connect with my story]. … They might have never spent three years in a hospital bed, but they know what pain is.”

Carpenter realized the value of the scars he developed from his injury and subsequent surgeries while trying to minimize their visibility with scar revision therapy.

“While I was at Walter Reed, I couldn’t rush my surgeries anymore than I was, so in between all of those therapy hours and surgeries, a lot of my doctors were addressing … some scars on my face, if I wanted to, I could just come by the clinic and do scar revision therapy,” recalled Carpenter. “At this point in my recovery … I hadn’t really had the deep thought to follow my hospital time and really realize the lessons that I had learned along the way, so I thought, ‘Okay. I’ll try some scar revision therapy.’ I go into the clinic, and not only is it extremely painful, but I come out and my face — I mean, I was unrecognizable. I was swollen. I didn’t even recognize myself in the mirror.”

“At that moment, I had a few epiphanies, one was: I’m trying to buffer out a scratch on a car that has been completely totaled,” quipped Carpenter. “Both my arms are skin grafted, my right one from — it doesn’t function right — so even if I didn’t have the scars, you would be able to [observe my injury]. I have skin grafts and scars from my wrists all the way to the top of my shoulder.”

Carpenter continued, “So there was that, but on a deeper level, I realized: why am I trying to do this when I’m going around the country and speaking to people and trying to share hope that it’s okay — physically, mentally, or emotionally — if you get injured and if you have scars. I kind of felt like a hypocrite almost.

“Scars are truly a beautiful thing,” declared Carpenter. “Yes, they can be a little ugly on the outside, but scars show that you’re a survivor, that you made it through something, and not only did you make it through, but now you’re stronger and wiser and more educated because of that tough time that you went through. It’s my favorite chapter in the book — Don’t Hide Your Scars, Chapter 13 — and this kind of realization how scars connect all of us and how struggle connects all of us.”

Carpenter was awarded the Medal of Honor for using his body as a shield to protect a fellow Marine from an enemy hand grenade. His Medal of Honor citation reads:

For conspicuous gallantry and intrepidity at the risk of his life above and beyond the call of duty while serving as an Automatic Rifleman with Company F, 2d Battalion, 9th Marines, Regimental Combat Team 1, 1st Marine Division (Forward), 1 Marine Expeditionary Force (Forward), in Helmand Province, Afghanistan in support of Operation Enduring Freedom on 21 November 2010. Lance Corporal Carpenter was a member of a platoon-sized coalition force, comprised of two reinforced Marine squads partnered with an Afghan National Army squad. The platoon had established Patrol Base Dakota two days earlier in a small village in the Marjah District in order to disrupt enemy activity and provide security for the local Afghan population. Lance Corporal Carpenter and a fellow Marine were manning a rooftop security position on the perimeter of Patrol Base Dakota when the enemy initiated a daylight attack with hand grenades, one of which landed inside their sandbagged position. Without hesitation, and with complete disregard for his own safety, Lance Corporal Carpenter moved toward the grenade in an attempt to shield his fellow Marine from the deadly blast. When the grenade detonated, his body absorbed the brunt of the blast, severely wounding him, but saving the life of his fellow Marine. By his undaunted courage, bold fighting spirit, and unwavering devotion to duty in the face of almost certain death, Lance Corporal Carpenter reflected great credit upon himself and upheld the highest traditions of the Marine Corps and the United States Naval Service.