After their son suffered a devastating brain injury playing football, Pat and Tammy McLeod saw their marriage put to the test. 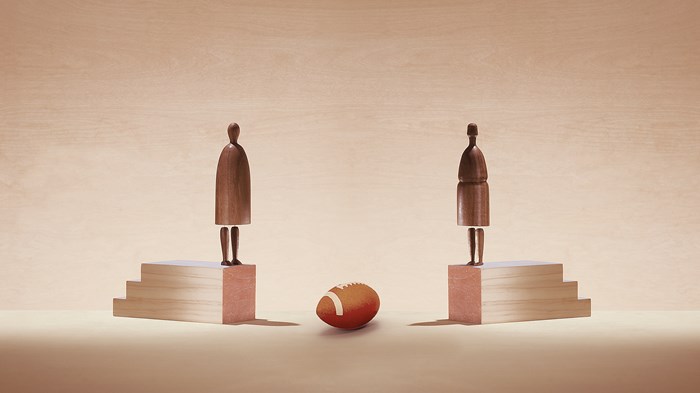 The family and friends of Zach McLeod gathered at a church in Boston for a solemn ceremony entitled “A Time to Mourn.” They watched a video of his life from birth until the devastating accident he suffered at age 16. Zach had been a gifted athlete, student leader, and beloved friend. His mother spoke of how much she missed hearing Zach’s prayers, thoughts, and dreams. Guests wrote down what they missed most about the young man they had known—the young man they would never see again.

Then, later that day, the same group reconvened. This time they celebrated a new life and watched a video showing milestones of progress. Who were they celebrating? Zach McLeod. In fact, Zach himself attended this ceremony, called “A Time to Dance.” He was elated to see so many friends and family members, to see and to hear their affirmations of what they appreciated about him.

If this sounds like a confusing day, not to mention an emotional whipsaw, welcome to the world of “ambiguous loss.” And welcome to Hit Hard: One Family’s Journey of Letting Go of What Was—and Learning to Live Well with What Is, a powerful new book by Zach’s parents, Pat and Tammy McLeod. Hit Hard deals with the messy contradictions of a life where suffering and joy are not strangers but siblings that share the same house.

The Language of Loss

Pat and Tammy were attending a ministry meeting when they received a nightmarish phone call. Their son Zach had sustained a catastrophic head injury in a high school football game. Zach survived, but today he speaks with great difficulty and requires 24/7 care. Pat and Tammy had to come to grips with the complex realities of taking care of him while parenting their other three children and juggling their careers in ministry. They both serve as chaplains for Cru, an interdenominational Christian ministry, at Harvard University. Tammy is also the director of College Ministry at Park Street Church in Boston.

The McLeods wrestled for a way to understand what they were experiencing. Alternating as authors, Pat and Tammy write about the same events from different points of view. Having and not having their son in the way they once did put them on what felt like opposing sides. Pat focused on the “have” part of that reality, while Tammy gravitated toward the “have not” end. As a result, they struggled to connect with one another in their grief. This book is as much about how a marriage survives in the wake of a crisis as it is about the ongoing trauma.

Because Hit Hard is so honest, it is also raw, intense, and messy. It is emotionally difficult and uncomfortable to read. The book takes readers through a series of traumatic events and explores how Pat and Tammy process each of them and the relational challenges that ensue. The details of their loss are heart-wrenching: Tammy gets cancer, and Zach sustains a second brain injury. For people who have endured trauma (or are enduring it still), the details of their journey may reopen wounds before providing hope.

The McLeods could not find language for what they were experiencing, which only deepened their sense of loss and isolation from their community and from one another. Their friends were unsure what to say. Should they share their joy that Zach had survived? Or grieve with them for the loss of the life that was?

Countless books and articles on grieving failed to speak to the McLeods’ circumstances. Finally they found a book by family therapist Pauline Boss called Ambiguous Loss: Learning to Live with Unresolved Grief. Putting a name to their experience was powerful. The words “ambiguous loss” validated their pain. They were not alone in their pain; it had a category of its own and was shared by others.

Boss describes two kinds of ambiguous loss. One is when the physical body is absent yet the person is psychologically present in the mind of the loved one. Examples of this include those missing because of war, natural disasters, kidnapping, adoption, or divorce. The other kind of loss happens when a person is bodily present but is not the same cognitively or emotionally. Examples of this kind of loss include people affected by Alzheimer’s, addiction, mental illness, or debilitating brain injury.

Boss wrote that to pursue closure is a fruitless endeavor. Fixing the ambiguity is often impossible. The goal then becomes how to live well with the ambiguous loss and increase tolerance for it. Tammy writes, “The secret to living well with ambiguous loss requires living well with both having and not having someone the way you once had them.” The McLeods needed to learn how to hold two opposing ideas in their minds at the same time. The Zach they had known was gone. A new Zach survived. They celebrated his survival but mourned what had happened to him.

Finding out that their grief had a name somehow changed things for the McLeods. It not only authenticated their pain but also clarified the source of the tension in their marriage. They realized their marital challenges had not been rooted in one spouse being right and the other being wrong. It was the ambiguity of the loss. Giving a name to their grief did not remove the debris, but it did throw light on the scene, so that they were less frequently tripping over things or bumping into each other in the dark.

In the beginning of the book, Tammy laments all of the things her son could never do again. He would never play football or sing with her, a hobby they enjoyed together. A scene at the end of the book illustrates how Tammy has made peace with their reality. Two hulking football players are holding Zach up as the three of them step onto the playing field. Zach is dressed in the team uniform, but he isn’t playing. His gait is not as smooth and his posture not as straight as the other players. But Zach is a leader in his own way. He sets an example by showing up and rising from every hard hit of life. He plays a motivational presence on the field and in the community.

Hit Hard can help those struggling with all kinds of grief, but especially those experiencing loss that has no clear end. Tammy felt understood when she read Boss’s words that living with continuous uncertainty and loss “is the most stressful kind of loss people can face.” The book can also help those who want to support someone experiencing a loss that feels complex, contradictory, and elusive. And lastly, it may assist marriages or other relationships in tension due to differences in how people process grief.

As Pat writes, “Ambiguous loss will probably always remain part of our family’s legacy. It will move in and out of the forefront, but never completely disappear. Like mountain hikers, we’re learning how to cinch our backpack straps tighter, adjust the weight so it doesn’t rub on already stressed spots, and keep climbing….Today we live in that redeemed ambiguity—incredible suffering and incredible love in the same messy world.”

Joyce Koo Dalrymple is a wife and mother, a minister of discipleship and women, and a former attorney.

Baseless criticisms foisted upon the Church are cyclic. They repeatedly appear, are confronted and debunked by one generation, only to reappear in a future generation. Some of these, like the wholesale condemnation of the Crusades, recur primarily as the result of historical ignorance by Christ-hating heretics and skeptics. Others, like the lie that “religion is responsible for more wars than any other cause,” are kept alive in part, by professors of the Christian faith who attempt to appease corrupt hearts and minds.

In our age of anti-truth, facts are ineffective in contending with the lies parroted by those whose view of reality is merely subjective. Nothing short of a personal encounter with the Divine will affect them. It’s a frightening situation that portends escalating violence and unfathomable wickedness for all involved.

Human history is replete with demonstrable proof that when man becomes the arbiter of morality, unspeakable carnage and suffering are the certain outcome. The hundreds of millions of murders and torturous deaths perpetrated by communist and socialist regimes in Africa, Asia, Europe and North America profoundly illustrate the consequence of human arrogance.

Statisticians can debate the body counts racked up by monstrous butchers: Joseph Stalin, Mao Zedong, Pol Pot, Idi Amin and American abortionists, but the numbers are so enormous that any comparison between them and the thousands of tragic deaths caused by the Crusades, the Spanish Inquisition, and the Salem Witch trials, are silly and absurd. The God-rejecting man is supremely dangerous and miserable.

Now, the resurgent charge that “the Church is full of hypocrites” is being revived. Short-sighted pastors and teachers frequently attempt to befriend the lawless through self-flagellation. It always fails terribly. One of the best responses to the ludicrous accusation of hypocrisy in the Church, comes from Dr. Michael Youssef, who simply says, “Yes, and we have room for one more.”

The fact is that hypocrisy is most rampant—not in the Church but in our godless evil culture. After all, one who sets a high goal for himself or herself and occasionally fails to reach it, is no hypocrite. He is a hypocrite who claims to be sufficiently noble to judge the righteous, while rejecting defined moral principles. She is a hypocrite who aborts her child, and then screams about human rights. They are hypocrites who celebrate every form of sexual degradation while professing to care about children’s futures.

No righteous authority can exist apart from the absolute and unchanging standard of morality supplied by the Creator. As respect for the standard declines, the godless will always supplant timeless moral law with a personal subjective counterfeit that appeals to his or her capricious feelings.

The human eye cannot detect darkness unless there be a contrasting light. In like manner, people who keep large numbers of dogs are oblivious to barking noise and those who live with many cats disregard the odor of litter boxes. But their visitors are repulsed. Thus, worldlings cannot see their own hypocrisy because they have become accustomed to the moral sewer in which they dwell.

The truth is that the unbelieving secular culture is infinitely wicked and hypocritical. The Christian Church has civilized a barbaric world without resorting to the tyranny often employed in other cultures. Christian values provided the freedoms that Americans enjoy, abuse, and routinely take for granted.

Pastors and teachers who forfeit moral ground for the sake of a friendship, or, in a misguided effort to demonstrate love for the lost, are dancing with devils. And the dance always ends the same way, in stumbling confusion, loss, and a little bit of death.

Are sins, unfaithfulness, and heresies commonplace in churches today? Of course they are. But churches are purified by straining out the polluting influences of sin, by regular washing with truth, and by the disinfecting power of God’s Holy Spirit. These are tasks that many, it seems, would prefer to avoid.

It would be unthinkable to close a hospital simply because a few patients could not be saved. How much more absurd to condemn the Church—which holds the keys to eternal life—in order to garner the acclaim of the dead and dying? Perhaps it’s worth considering whether denying the Bride of Christ is not tantamount to denying Christ Himself.