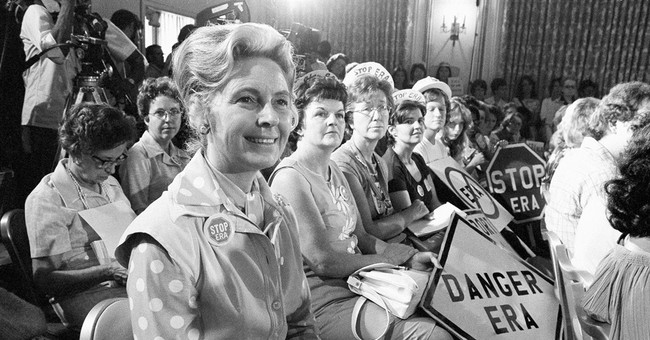 Editor’s note: This column was co-authored by Tabitha Walter.

The House Judiciary Committee recently marked up H.J.Res.79, and will soon get a floor vote. This joint resolution seeks to remove the congressional deadline for the ratification of the Equal Rights Amendment. When Congress originally passed the ERA, they put a deadline in place for states to ratify it. The ERA failed to win ratification in enough states before the deadline passed and is thus legally dead, but this stale effort is back to enshrine abortion-on-demand at the expense of hard-won protections for women.

The ERA would not only create a right to on-demand abortions in all 50 states, but it would allow for unrestricted taxpayer-funded abortions through all nine months of pregnancy. Abortion activist group NARAL Pro-Choice America states, “With its ratification, the ERA would reinforce the constitutional right to abortion by clarifying that the sexes have equal rights, which would require judges to strike down anti-abortion laws because they violate both the constitutional right to privacy and sexual equality.”

We already see this at the state level. The American Civil Liberties Union (ACLU) has encouraged lawyers to use state ERAs to strike down restrictions on abortion such as parental consent laws. They have also filed briefs in Hawaii, Massachusetts, Pennsylvania, and Connecticut arguing that since an abortion procedure is only performed on women, a state’s denial of taxpayer-funded abortion should be considered “sex discrimination” under their state ERA. Pro-abortion groups have won cases in New Mexico (N.M. Right to Choose/NARAL v. Johnson) and Connecticut (Doe v. Maher) in which the state ERAs upheld this notion.

Pro-life groups have offered compromise language that is abortion neutral. But ERA advocates have rejected that language in Wisconsin, Minnesota, and even Congress, adding weight to the assertion that proponents are set on using the ERA to claim a right to snuff out the lives of babies in the womb.

As Americans become increasingly disturbed by late-term abortions, even those who identify as “pro-choice,” and as the courts trend more conservative, the abortion lobby is growing increasingly desperate to enshrine abortion in the Constitution. The abortion industry is about eugenics, and has exploited “women” as the prop for its advocacy. The same is true with the Equal Rights Amendment. They claim the ERA is necessary to protect “women’s” rights, but what they really mean is that it protects abortion.

In fact, if the ERA were ratified today, it would undermine women’s rights. The 52-word amendment never mentions protection for the rights of “women,” instead prohibiting denial or abridging rights “on account of sex.” In 1972, those meant the same thing. Many of the hard-fought victories for women’s rights in that era used the term “sex,” such as the Equal Pay Act of 1963, the Civil Rights Act of 1964, the Equal Employment Opportunity Act of 1972, the Federal Minimum Wage Act of 1974, and the Pregnancy Nondiscrimination Act of 1964.

But today, the Left is unwilling to define “sex” in biological terms, arguing that the word incorporates “gender identity” as well. This redefinition has led to absurd results, allowing biological males to claim access to private, women’s-only areas in shelters, prisons, bathrooms, and showers. It has also allowed them to infiltrate (and dominate) women’s-only activities like sports. Those arguing for the ERA are certainly aware of these developments, and intend to apply this definition. Thus, while trying to protect abortion under the guise of equality for women, the ERA would erase women.

Of course, despite the wishes of its advocates, the ERA is dead. Thirty-six years after it died, proponents are trying to revive its corpse by ignoring the deadline and recognizing Nevada (2017), Illinois (2018), and Virginia (2020) as states that have ratified the ERA. Countless lawyers, the Office of Legal Counsel at the Department of Justice (OLC), and even Supreme Court Justice Ruth Bader Ginsburg have agreed that the ERA could not be ratified unless Congress started over. Even still, the House Judiciary Committee is seeking to remove the ratification deadline in H.J.Res.79.

Thus, we have all of this congressional, political, and soon judicial havoc over enshrining abortion. Members of Congress should care about being boldly pro-life, and not so much about being perceived as anti-women for opposing H.J.Res.79. They should not be fooled. If the ERA really was about protecting women, it would define “women” by biological sex. The ERA is not about women; it is about abortion, and countless innocent lives are on the line.

Patrina Mosley is Director of Life, Culture, and Women’s Advocacy at the Family Research Council. Tabitha Walter is Political Director for Eagle Forum.